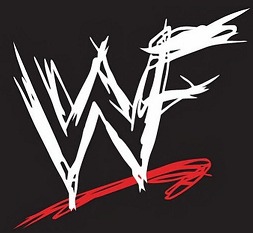 "Surely, the era of 'the superhero who urged you to say your prayers and take your vitamins' is definitely passé. Therefore, we've embarked on a far more innovative and contemporary creative campaign, that is far more invigorating and extemporaneous than ever before."
— Vince McMahon
Advertisement:

What did the WWF do to save itself from the verge of destruction? Why, it did what all great companies do: it copied everyone else's ideas — and did them better.

The WWF took a few pages out of the ECW playbook and injected extreme violence, overt sexuality, general vulgarity and even, shockingly bloody (albeit in a downplayed case) moments into its programming. The move offended and shocked the parents' groups who had grown used to the company's family-friendly programming during the days of Hulk Hogan and André the Giant — but the edgier content also drew in viewers in numbers the WWF had never seen before (and hasn't equalled since). Pay-per-view buyrates shot through the roof and TV ratings rose well above the ratings for WCW; the WWF had reclaimed its throne.

The official start of the Attitude Era, as marked by WWE's official timeline, is March 29, 1998, the date of WrestleMania XIV, where "Stone Cold" Steve Austin defeated Shawn Michaels for the WWF Championship (in what would be Shawn's last match for four years, due to an injured back). Austin and Michaels actually had planted the seeds of the Era before WrestleMania: Austin's famous "Austin 3:16" speech at King of the Ring 1996 (as well as his submission match with Bret Hart at WrestleMania 13) shot Austin into superstardom, whereas Michaels' involvement in the "Montreal Screwjob" at Survivor Series 1997 and his role in the formation of D-Generation X helped build the atmosphere that fostered the Attitude Era (a notable assist also goes to the aforementioned Hart and his match with Austin, and to Mankind, whose feud with The Undertaker brought more extreme matches into the WWF).

However, without a certain event, the Attitude Era may not have occurred. There was The Kliq. Kevin Nash and Scott Hall signed with WCW. A legendary event, known as the "MSG Incident" or "The Curtain Call" happened at their last scheduled WWF appearance. Shawn Michaels, Triple H, Kevin Nash and Scott Hall embraced in a group hug before Nash and Hall went to WCW. This was a major break in Kayfabe since the people involved were enemies at the time. Hall and Nash could not be punished since they were leaving the company. Michaels could not be punished since he was WWF Champion at the time. This left Triple H who was the only one who could be punished. Triple H was supposed to win the King of the Ring in 1996 but was punished for his involvement in the incident. Therefore, "Stone Cold" Steve Austin was made the winner at the event where he gave the infamous "Austin 3:16" speech.

The WWF also licensed a video game by Acclaim called WWF Attitude, released in 1999 to much fanfare after the popular WWF War Zone. Rather than sprites, the visuals were photo-realistic (for the time) 3D, there was tons of speech and voice samples, many wrestlers and outfits to unlock, and a great, in-depth "create-a-wrestler" mode. When it was released, it was considered the best wrestling game on the market, with THQ being the only ones close enough to touch it with their WCW entry. WWF Attitude managed to capture much of the spirit of a Raw episode or PPV broadcast during the Attitude Era, hence the name, and at the time it was praised by many. However, the gameplay was considered stiff in its time, as well as the date of release. Though it included many of the face and heel wrestlers accurately, there was no The Big Show and not many match types (for one, there was no "Hell in a Cell"). Arena customization was exclusively locked from the years 1997 to 1998. When Acclaim's license ran out, THQ picked it up and made the popular Wrestlemania 2000 and No Mercy games, also based on the Attitude Era, to which the latter was considered one of the greatest wrestling games in the medium. They would also produce SmackDown!, which would later become Smackdown VS Raw. WWE '13 features the Attitude Era heavily as the main focus, with 2K16 also having a decent focus.

Famous events and matches associated with the Attitude Era include:

People point to WrestleMania X-Seven as the end of the Attitude Era for a lot of reasons. (One of which being that everyone affiliated with WCW was relegated to silently watching WrestleMania from a skybox... could there have possibly been a more poetic visual than that?) WCW died the week before, ECW died shortly after, and the Austin/McMahon feud ended that same night, yet the industry had changed in a short amount of time.

Mileage varies on the quality of the WWF/WWE product after the end of the Attitude Era (since the company has lacked the competition that created the necessity for the Attitude Era), and when (or even if) it began to go downhill, but few can deny that the wrestling world hasn't been the same since.

That being said, while WCW and ECW might have died, the WWF still had to brace themselves for an invasion… or rather, an InVasion…