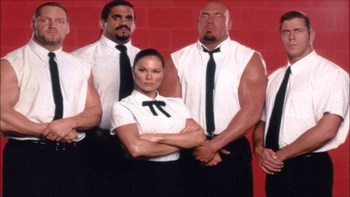 No, they aren't staging a production of The Book of Mormon.
L-R: Val Venis, The Goodfather, Ivory, Bull Buchanan, and Steven Richards.
Advertisement:

Right to Censor was a professional wrestling Power Stable in the WWF from mid-2000 to early 2001.

The group was formed when wrestler Stevie Richards (now insisting on refering to himself as "Steven Richards") began to randomly appear on WWF programming, doing things such as cover up the bodies of scantily clad women or remove weapons from hardcore matches, apparently taking offense from them. He was eventually joined by Bull Buchanan, The Goodfather (formerly The Godfather), Val Venis, and Ivory. The group temporarily forced The Kat into its fold, after reclaiming her "right to nudity", but The Kat and the WWF parted ways before that storyline could completely play itself out.

The Right to Censor came out victorious in at least one match of every pay-per-view they participated in from mid-2000 to early 2001, from SummerSlam 2000 to No Way Out Wrestling 2001. The group had a moderate level of success, with Buchanan and The Goodfather holding the WWF Tag Team Championship and Ivory capturing the WWF Women's Championship.

WrestleMania X-Seven was the symbolic end of the Right to Censor, as the stable lost all of the matches they were scheduled to participate in; Buchanan, Venis, and The Goodfather lost a six-man tag match against the APA and Tazz while Ivory lost her title to Chyna. The group was disbanded between April-May 2001 after feuding with The Undertaker.