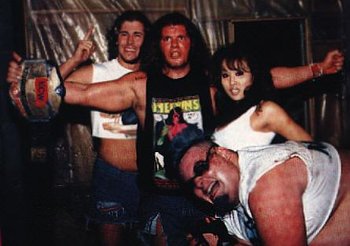 Raven's Nest was a Professional Wrestling Power Stable in ECW from 1995 to 1997. Raven put together the group for the purpose of destroying his longtime nemesis Tommy Dreamer, which stemmed, in the storyline, from when they were kids and Dreamer had been mean to Beulah McGillicutty when she was the fat girl at summer camp. It was the biggest group in ECW ever (see Loads and Loads of Characters below). There would often be ten or more people in the group at a time.

Later, Raven created other incarnations of the group in WCW such as The Flock and The Dead Pool,note Although Raven quit WCW and went back to ECW a month after the latter group's inception, which continued together without him as The Dark Carnival and in TNA such as The Gathering and Serotonin.

"What about the Nest's Tropes?":