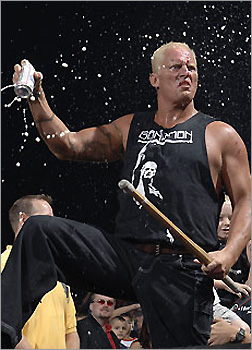 "Pop one open, light one up and let's get EXTREME!"
"'He is the originator of the Singapore cane!' noted [Mike] Tenay. Yeah, screw all those Singaporeans who used it before Jim Fullington."
—WrestleCrap, "Hardcore Justice: The One Night Stand We'd All Regret the Next Morning"

James Fullington (born June 16, 1963) is a retired Americannote Depending on the source, he's either from Philadelphia, Utah or Tampa. professional wrestler known as The Sandman. He is best known for his time in ECW, where he was a 5x NWA ECW Heavyweight/ECW World Heavyweight Champion

His began his career as Mr. Sandman in 1989, when he primarily wrestled in Tri-State Wrestling Alliance under a surfer gimmick. He struck gold in the mid-nineties, when ECW Vice-President Tod Gordon suggested that he mould a gimmick around his own powerful personality: the wetsuits were mercifully now out, and the black wifebeaters and kendo sticks were in. While not the most gifted worker, that arguably played to his advantage and he knew how to work a crowd; Paul Heyman knew a marketing hook when he saw it and dubbed Sandman "The Ambassador of Extreme".

Sandman was among the talent who jumped ship to WCW (as Hak) when ECW began to crumble in '99, but his Improv Fu and edgy gimmicks did not translate to a national stage (even in a neutered "Hardcore Division"), and he withdrew to ECW before the year was up.

In 2005, WWE came knocking when they were in the middle of reviving the ECW brand. The company wisely kept Sandman offstage the majority of the time, employing him as a kind of vigilante who appeared when some injustice was done. In June 2007 he got drafted into Raw, but was soon released from his contract on September of that year. Since then he has run with many promotions, including International Wrestling Cartel (where he became IWC Heavyweight Champion), MLW and TNA as part of its ECW reunion show, HardCORE Justice.

Not to be confused with the mythological character (we think), the Neil Gaiman comic, or Mr. Sandman.

"These tropes are politically incorrect, and damn proud of it!":