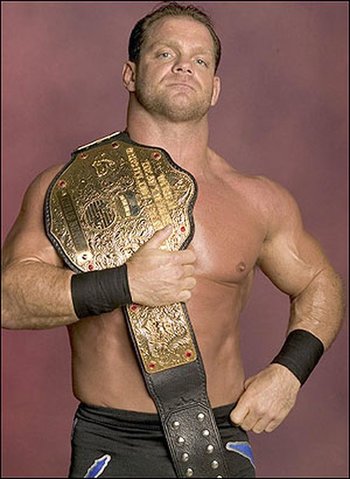 Say the name "Chris Benoit" to a wrestling fan, and you will invoke one of two images, if not both: that of one of the greatest professional wrestlers to ever perform in a ring, or that of a man who spent his last days committing a series of horrendous crimes that would shake the professional wrestling industry to its core.

Christopher Michael Benoit (May 21, 1967 – June 24, 2007) spent his youth idolizing fellow Canadian wrestlers such as Bret "The Hitman" Hart and the Dynamite Kid. In 1985, at the age of eighteen, Benoit made his wrestling debut in Canada's Stampede Wrestling and made his way all the way down to the tip of North America, wrestling in the Mexican-based Lucha Libre Internacional, AAA, and CMLL.

From there, he traveled to various overseas promotions, mainly to defend the IWGP Junior Heavyweight Title belt of New Japan Pro-Wrestling as "Pegasus Kid", for a number of years, then made his debut in ECW in 1994. It was in ECW where Benoit became known as "The Crippler": During a match with Sabu, Benoit performed a back body drop, but Sabu landed on his head and broke his neck. Despite the act being an accident, the "Crippler" nickname stuck with Benoit for the rest of his career.

In 1995, Benoit returned to WCW (he had a short run there in 1992 and early 1993), and after impressing management with his in-ring work, Ric Flair made Benoit a member of The Four Horsemen stable. During this period of his career, Benoit feuded with Kevin Sullivan, who also booked for WCW at the time. The feud centered Sullivan's on-screen valet — his actual wife, Nancy — having an affair with Benoit; to keep the angle steeped in kayfabe, WCW forced Benoit and Nancy to spend time together so the illusion would appear real. Chris and Nancy turned the angle into reality by having an affair, and Nancy soon left Sullivan to marry Benoit.

Benoit won fans over with his in-ring work over the next few years, but management refused to push him into the main event level until Vince Russo and Ed Ferrara took over booking duties for WCW in 1999, near the peak of the Monday Night Wars. But when Russo and Ferrara were suspended by WCW management, the higher-ups placed Kevin Sullivan back on the booking team. Benoit, alongside a number of other wrestlers, saw this development as a hazard to their careers, and thus they delivered an ultimatum to management: "He goes, or we go." Management tried to appease the group by booking Benoit to win the WCW World Heavyweight Championship

at Souled Out 2000. But it proved a fruitless endeavour: Benoit — along with Eddie Guerrero, Perry Saturn, and Dean Malenko — asked for, and were given, their releases after the event. (WCW stripped Benoit of the championship the next day.)

Weeks later, Benoit, Guerrero, Saturn, and Malenko showed up on WWF Raw—they emerged from the live audience to attack several wrestlers. The debuts of Benoit and his fellow ship-jumpers, dubbed "The Radicalz", signaled the beginning of the end of WCW; a little more than a year after The Radicalz debuted in WWE, WCW folded (and was bought by WWE).

Over the next four years, WWE built Benoit up into a main event caliber wrestler. He produced classic matches with the likes of "Stone Cold" Steve Austin, Kurt Angle, Eddie Guerrero, and Edge. His time in SmackDown's tag division during 2002 made him part of a trio of teams fans referred to (then and now) as the "SmackDown Six": Benoit, teaming with Angle, faced the team of Edge and Rey Mysterio at No Mercy 2002 in what was easily a Match of the Year candidate and arguably one of the greatest tag team matches ever. Those two teams eventually feuded the Guerreros (Eddie and his nephew Chavo), which led to several matches between both the teams themselves and their individual members — matches that ultimately made SmackDown a must-watch show. Around this time, he was named the third person to receive Cauliflower Alley Club's Future Legend Award.

In 2004, Benoit had arguably the best year of his career: he won the Royal Rumble by lasting the entire match (over an hour after having entered #1), he went on to WrestleMania XX to win the World Heavyweight Championship in Madison Square Garden in another Match of the Year candidate by making Triple H tap clean to the Crippler Crossface, and he retained the title the next month at Backlash by making Shawn Michaels tap to the Sharpshooter in Canada (a symbolic apology to the Canadian crowd for the Montreal Screwjob). Benoit lost the title to Randy Orton at SummerSlam 2004, but stayed near the main event level for the rest of the year as he feuded with Orton, Edge, and Triple H and continued to vie for the World Heavyweight Championship.

After 2004, WWE shuffled Benoit back down to the midcard, deciding that his skills could better help push new talent up the card. Benoit won the United States Championship several times and feuded with up-and-coming star Montel Vontavious Porter (MVP) for months. In 2007, WWE placed Benoit on the renewed ECW brand—a move that instantly made him a top contender for that brand's championship. At Vengeance: Night of Champions 2007 on June 24, Benoit was scheduled to go up against indy darling CM Punk for the vacant ECW Championship.

And then we found out why.

The next day, Atlanta police found the bodies of Chris, Nancy, and their seven-year-old son Daniel in their home. The police didn't reveal until later that evening — and a number of fans would not find this out until after WWE had run a Benoit tribute show in place of Monday Night Raw — that over the course of the previous weekend, Benoit had strangled his wife and son, then hanged himself in his home gym.

At the next night's ECW show, Vince McMahon began the show acknowledging (more-or-less) that WWE had been too hasty regarding paying tribute to Benoit, and that his comments would be the only time Benoit's name was mentioned for the rest of the night. Years down the road, it became clear that this was the last time WWE would mention Benoit at all.

From that day forward, controversy about Benoit's life and career erupted. Did the multiple concussions he suffered over the years play a role in his actions? Should fans bring him up when discussing the best wrestlers ever, or is it right to even remember him as a great wrestler in light of what he did? Should WWE glorify Benoit's abilities and career accomplishments, or should it keep its current course of only recognizing him as a matter of historical record? What should the pro wrestling industry itself do to prevent something like this from happening again — if it could even do so?

Wrestling historians and critics have pointed to the Benoit murder-suicide as the catalyst for the company's "PG era", which was a noticeable period of WWE heavily sanitizing its programming. That and WWE's decision to refrain from ever mentioning Benoit again except for title reign records (and carefully skirting around if someone else gets a callback to a match or scenario with him) remain points of debate and controversy among pro wrestling fans. Whether it was right to do so or not is a subject with as many different opinions as can be found, and it seems unlikely that a consensus on Benoit will ever truly be reached.

While the debate about how to remember Chris Benoit continues among wrestling fans and pundits to this day, no one denies the truth: June 25th, 2007 was the darkest day in the history of professional wrestling.