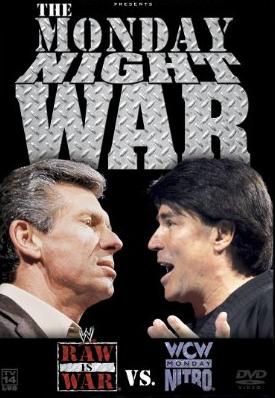 The Monday Night Wars refers to the time period from 1995 to 2001 when WCW's Monday Nitro went head-to-head with the then-WWF's Monday Night Raw. During this time period, the two individual companies rose to heights never seen before or since in Professional Wrestling.

The war began when Ted Turner approached television producer and entrepreneur Eric Bischoff and asked the latter what he believed World Championship Wrestling needed to do to overtake the World Wrestling Federation. Seeing the success of Monday Night Raw as a weekly primetime wrestling program, Bischoff proposed a weekly timeslot on Mondays to directly compete with Raw; as a result, in 1995, he got what he wanted when Nitro hit the air directly opposite Raw. At the time, Nitro aired live every week, as opposed to pre-taped episodes of Raw which the WWF had filmed days (or weeks) in advance, which allowed Bischoff and the bookers to reveal Raw results on Nitro.note A move that would later come back to bite them on the ass. In response to this, the WWF eventually transitioned Raw into a live weekly broadcast.

From approximately mid-to-late 1996 until early 1998, Nitro routinely beat Raw at its own game, mainly due to the ultra-hot "nWo" angle.note As Bischoff famously put it, WCW beat the WWF for "eighty-four weeks in a row". Facing an embarrassing defeat and a possible filing for bankruptcy, the WWF fired back in late 1997: starting around the time of the Montreal Screwjob, the company started to become Darker and Edgier, a move inspired by the success of upstart indie promotion ECW, which resulted in what fans (and eventually the now-WWE themselves) now refer to as the "Attitude Era". As the WWF's adult-oriented fare competed with WCW's more family-friendly product, the former eventually overtook the latter in the ratings.

In the last great shot of the war, WCW pulled the trigger on a potentially huge match in July 1998: live on Nitro, then-WCW United States Heavyweight Champion

"Hollywood" Hulk Hogan for the title. WCW won the ratings battle that night, but it gave up a ton of potential pay-per-view revenue to deliver the match on free TVnote Many critics have noted that Bischoff's Fatal Flaw was putting TV ratings ahead of absolutely everything else, including profit; numerous pundits mark this moment down as the beginning of WCW's downfall.

While Goldberg's victory may have put the lid on WCW's coffin, the first nail came from the Fingerpoke of Doom: the combination of a Twist Ending to a world title match that led to the reformation of the nWo coupled with the over half million viewers Nitro lost when announcer Tony Schiavone revealed that Mick Foley would win his first WWF Championship

on a pre-taped episode of Raw, with Schiavone quipping "That'll put butts in seats" after the spoiler, all but killed the promotion that night note although it should be pointed out that the ratings of Nitro were the same the very next week.

The WWF flourished due to its Attitude Era content and WCW's constant missteps. "Stone Cold" Steve Austin, The Rock, Mick Foley, Triple H, The Undertaker and Kane practically became household names during this time, and the WWF's success turned it into the most powerful wrestling promotion in the world. On the flip side, WCW kept pushing the nWo angle for far longer than it should have, and it failed to build new stars who could ultimately replace the older stars on the roster (thanks to a number of those older stars working on the company's booking team and/or having a "creative control" clause in their contract that gave them veto power over their own booking); these problems caused WCW to start losing viewers at an astonishing rate.

From 1999 to 2001, WCW tried, and failed, to mirror the WWF's successful changeover to the Attitude Era by doing everything from hiring Vince Russo to instituting a Hardcore Title

and even trying to cross-promote the company using music and movie stars, most notably its infamous decision to make David Arquette WCW Champion.note It should be said that Arquette himself thought this was a terrible idea, and donated any money he earned from wrestling to the families of Owen Hart, Brian Pillman, and Darren Drozdov. After the AOL/Time Warner merger went down, however, the conglomerate put WCW up on the chopping block in an attempt to get rid of what it saw as a money drain. Since Turner could no longer protect WCW (he had pretty much left Time Warner when the AOL deal proved to be a huge mistake following the dot-com bubble bursting), and WCW couldn't turn itself around fast enough, it was eventually sold to Vince McMahon for $4.2 million. Bischoff tried to purchase the company in the weeks prior to its sale so he could eventually reboot the entire promotion, but those plans eventually fell through.

The Monday Night Wars ended on March 26, 2001; after WCW held its final edition of Monday Nitro, Vince McMahon appeared live on both Raw and Nitro as part of a special simulcast (with Vince at Raw). As part of the first major storyline to come out of the purchase, Shane McMahon, Vince's son, appeared at Nitro to announce that he had bought WCW instead of his father. This led into The InVasion Angle, which would eventually put the WCW brand to rest for good. WWE later produced a DVD, The Monday Night War, that covered this timeframe in wrestling history; WWE's Rise and Fall of WCW DVD set covered the Monday Night Wars as part of WCW's overall history.

The book The Death of WCW, co-authored by WrestleCrap writer RD Reynolds, examines many of the problems and decisions that led to WCW's ultimate downfall. The book includes numerous historical facts and figures, such as pay-per-view buyrates and earnings, that trace WCW's rise to prominence in 1997 all the way to its eventual demise.

When Hulk Hogan and Eric Bischoff arrived in TNA in 2010, that company soon moved its weekly show (Impact) to Monday nights in what looked like an attempt to reignite the Monday Night Wars. Impact ended up getting only a third of the ratings of Raw (at best), and it eventually moved back to Thursday after a mere four months.note TNA's "Monday Night Skirmish" received the 2010 Gooker Award from WrestleCrap.

On October 2, 2019, AEW Dynamite debuted on TNT, airing opposite WWE NXT, which had debuted on the USA Network two weeks prior, moving from the WWE Network, kicking off what fans dubbed the "Wednesday Night War".note Despite NXT being on TV first, this war was initiated by WWE instead of AEW, who preemptively moved NXT to the USA Network to counterbook Dynamite after AEW announced what time they would be running. The Wednesday Night War lasted less than 1 1/2 years, eventually ending with a whimper rather than a bang when NXT was moved by the USA Network from Wednesdays to Tuesdays starting from April 13, 2021. While AEW had been decisively "winning" the ratings battle almost every week, the move was motivated more by the preferences of the network (who wanted to air the NHL in NXT's timeslot) than by any decision from WWE to "back down", and the general consensus was that the end of the conflict would simply be better for everyone.note It would also have resulted in NXT going head-to-head with Impact Wrestling (which had been airing on Tuesdays for years by now) instead, but Impact saw the writing on the wall and hurriedly moved their show back to Thursday nights instead starting from April 8, which had the interesting side effect of putting a major wrestling show on TV every day of the week; Raw on Monday, NXT on Tuesday, Dynamite on Wednesday, Impact on Thursday and SmackDown on Friday. However NXT's failure to defeat AEW was seen as a humiliating defeat for WWE within the company and led to considerable changes, with NXT eventually being taken out of the hands of Triple H and repackaged into the almost-unrecognisable "NXT 2.0".note Which ironically ended up winning the Gooker Award for 2021.

While having weekly national wrestling shows programmed against each other was different, many of the cheap shots and dirty tricks had been done before in the late stages of the territorial era, making this concept qualify as Older Than They Think: