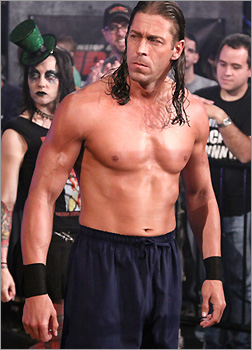 Michael Stephen Manna (born October 9, 1971) is an American professional wrestler from Philadelphia, PA best known for his work in ECW as Stevie Richards. He began his career in 1992 and appeared on the very first ECW event, February 25, 1992, going to a 20-minute draw with Jimmy Jannetty. He would struggle in the midcard for close to three years, until a series of losses to Tommy Dreamer in late 1994 would serve to invigorate his career via the debut of Raven. Richards would become Raven's flunky and they would go on to hold the ECW World Tag Team Titles

Richards would ultimately follow Raven to WCW in Summer 1997 but leave in early October to briefly go back to ECW. He would bounce around the independents until he arrived in WWE in 1999 where he would stay until 2008. He again spent time on the independent circuit before turning up in TNA in 2009, now wearing hospital scrubs and treating Abyss at "Dr. Stevie's" mental health clinic. This was revealed to be a front for Stevie's new stable, consisting of the decidedly unstable Raven, Abyss and Daffney (pictured).

Along with his two ECW World Tag Team Title reigns, he was also a 22x WWE Hardcore Champion

and a Top Rope Productions Heavyweight Champion. He has also competed for various National Wrestling Alliance territories and for many independent promotions around the U.S.

"The Original King of Tropes":