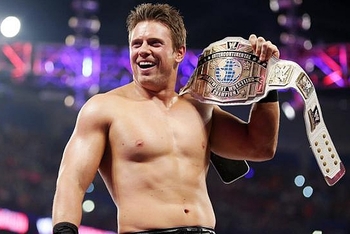 (Images of Hollywood, then silence)
AAAAAAAWESOOOOOOME!

He trained in the Ultimate Pro Wrestling University under Shane and Shannon Ballard. He is better known by his ring name: The Miz. He's a two-time WWE Champion

,note one time with John Morrison, and one time with The Big Show and one-time Smackdown Tag-Team Championnote with Shane McMahon.

Outside of wrestling, he started as a reality TV star in The Real World. The wrestling skits he did during the show lended him a tryout at the WWE, and the rest is history. Afterwards, he had stints in movies (starring, among other films, in The Marine 6: Close Quarters) and protagonizes Miz and Mrs., the reality TV show following his personal life and that of his wife, Maryse as well as their children.

That Other Wiki has a rundown on his life and career.

"The Most Must-See Tropes of All Time":

When my hand goes up, YOUR MOUTHS GO SHUT!