Music / Ride of the Valkyries 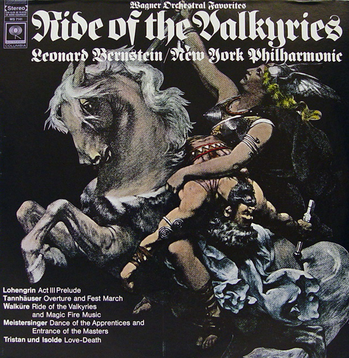 "Never let it be said that a Chooser of the Slain can't make an entrance."
— Harry Dresden, Small Favor, Chapter 43

The "Ride of the Valkyries" (German: "Ritt der Walküren", or "Walkürenritt", as the composer referred to it) is a fanfare-like orchestral music theme originating from Richard Wagner's opera Die Walküre (The Valkyrie), which is a part of the cycle Der Ring Des Nibelungen (The Ring of the Nibelung).

When Wagner wrote it, he already intended it to evoke images of epic battles, but what really made that music the Standard Snippet for military badassery in Western pop culture was the iconic helicopter raid in Apocalypse Now (even those who haven't seen the movie know that scene, or at least used to). As a result, when the characters are charging on big machines, raining Death from Above on their enemies or just riding a helicopter, either the soundtrack will play "Ride of the Valkyries", or a reference to it will be made.

The "Ride" has been popular as a standalone piece from the very moment it first premiered as part of Die Walküre in 1870. Ironically, Richard Wagner initially opposed the use and performance of the piece outside of the original opera, even going as far as to write letters of complaint to publishers who sold the sheet music as a separate work. Also ironically, the scene in Apocalypse Now that served as the Trope Codifier was meant to allude to Nazi Germany (Hitler was a huge fan of Wagner and often used his music to rally his troops), reflecting how the soldiers in that scene are intended to be viewed as war criminals—not that it worked.

Compare Also sprach Zarathustra and Carmina Burana. Examples of this song in the media also qualify as Public Domain Soundtrack. Often an example of Orchestral Bombing.

This music has appeared in: