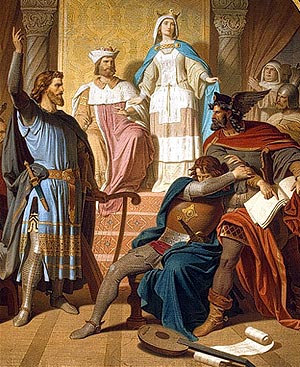 Tannhäuser und der Sängerkrieg auf Wartburg (or, in English, "Tannhäuser and the Song-Contest at the Wartburg Castle

"), more commonly known as Tannhäuser, is a "romantic opera in three acts" by Richard Wagner. The opera first premiered in Dresden in 1845, but a revised and extended version (translated into French!) was prepared by the composer for the Paris Opéra in 1861, and it is this later version that is more commonly performed today (in a suitably Teutonic retranslation by the composer).

Wagner based the plot of his opera on a conflation of two originally unconnected legends. The first tells of a minnesinger (or "minstrel of love") and knight, called the Tannhäuser (literally, "man from the fir-tree-home"), who descended into a subterranean kingdom under a mountain (the so-called "Mountain of Venus" or Venusberg, identified by Wagner with the real Hörselberg

◊ near the town of Eisenach

) and won the favors of the goddess of love (called alternately Venus or Holda, her Latin or German names, by Wagner); after a period of some years, the knight repented and fled the Venusberg to seek penance from Pope Urban IV; the pope rejects his penitence, telling him that sooner will his staff grow new leaves than forgiveness be possible for such as he, and Tannhäuser, despairing, returns to Venus — three days later the staff does indeed burst into leaf, but the pope's messengers cannot find the knight. The second tells of the "War of Song" conducted by the legendary minnesinger Heinrich von Ofterdingen (and his sorcerous companion Clinschor (=Klingsor (!)) of Hungary) against the most famous minstrels of mediæval Germany at the court of Landgraf (or "territorial count") Hermann von Thüringen; in the course of which Clinschor prophecies the birth of Elizabeth of Hungary, later to be the wife of the Landgrave's son and a canonized saint. Wagner radically reshaped these legends, identifying the historical (though pseudonymous) Tannhäuser with the (probably) mythical Ofterdingen, and transporting the former from his own time (fl. c. 1250 A.D.) to that of Landgrave Hermann I of Thuringia, some 50 years before, and transforming the Landgrave's daughter-in-law into his niece and Tannhäuser's true love.

For a summary of the plot, see our synopsis page.

Wagner's opera drew from many sources: a popular ballad reprinted in the famous folk-song collection, Des Knaben Wunderhorn; Heinrich Heine's poem „Der Tannhäuser: Eine Legende"; E. T. A. Hoffmann's "Der Kampf der Sänger" (included in his Die Serapions-Brüder); and possibly from Carl Maria von Weber's Der Freischütz, an opera which Wagner greatly admired and with which Tannhäuser shows some structural similarities (Weber himself had considered writing a Venusberg opera). It proved highly popular in Germany, but the première of the revised version at the Paris Opéra was a notorious failure — though more for political and personal reasons than artistic ones. (The gentlemen of the royalist Jockey Club resented both Wagner's patron, the Bonapartist Princess Metternich, and his refusal to put the then-obligatory ballet sequence in the second rather than the first act of the opera, requiring the prime donne of the Opéra to forgo either the ballet or their suppers — with the gentlemen of the royalist Jockey Club. At the first three performances they interrupted the opera with cabman's whistles, and the disgruntled Wagner withdrew the work. (To the anti-Semitic composer's even greater disgust, the settings and costumes were immediately re-used for a new production of Meyerbeer's ever-popular Robert le Diable.)) However, the new version quickly established itself, and the opera, in both versions, has proven to be one of the composer's most popular works, both in the opera-house and in the concert-hall.

Blade Runner's Tannhäuser Gate is probably inspired by this Tannhäuser.

Tannhäuser is associated with the following tropes: