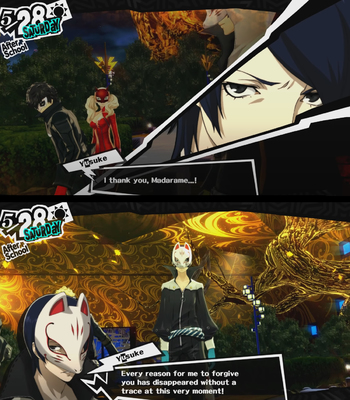 Yusuke has had enough.
"Some lives aren't worth saving."
— Ogen, Octopath Traveler
Advertisement:

At that point, the hero comes to a sad realization: the villain is Beyond Redemption.

This is when a hero has been making a consistent effort to have a villain turn away from evil and become The Atoner, but eventually stops trying. This is often a bad sign for the villain; whereas the hero might have not gone into a fight at full power before, now The Gloves Come Off and they stop holding back. Often occurs towards the climax of a story (especially before the Final Battle, so the hero can really cut loose). Note it's still possible for the villain to pull a Heel–Face Turn for some other reason after a hero decides they're Beyond Redemption. What matters for this trope is that a hero had been trying to turn the villain good, but has given up.

Usually seen in media aimed at young adults and older, or on the cynical end of the Sliding Scale of Idealism vs. Cynicism. Long-running series often go about this as a way of raising the stakes; if the audience knows that the hero won't go the merciful route anymore, there's sure to be some escalation of tension. If the villain himself thinks he's not worth redeeming, he might say "I've Come Too Far."

This is In-Universe Examples Only, i.e when an in-universe character has the opinion that someone is beyond redemption. The Out-of-Universe variant is Moral Event Horizon.

See also This Is Unforgivable!. Contrast Even Evil Can Be Loved. Not to be confused with It Is Beyond Saving, which is about a place that can't be rebuilt.