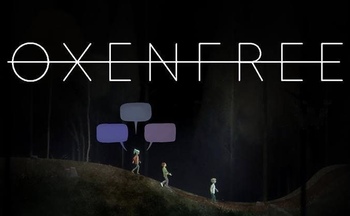 The cover, showing off the real-time dialogue mechanic.
Advertisement:

Described as being both a supernatural thriller and a coming-of-age story, you play as the teenage Alex. Set one year after the death of her brother, Alex, her new step-brother Jonas, and her friends go to Edwards Island, an abandoned military base on the West Coast. While planning to have a night of simple partying, they instead get involved with the supernatural as they tune an old radio.

The Playstation 4 version came with a New Game+ mode, which was patched onto the other platforms for free. This New Game Plus mode features new plotlines and endings.

You can see the first and second teaser here

In April 2021, the sequel Oxenfree II: Lost Signals was announced, set five years after the events of the first game.