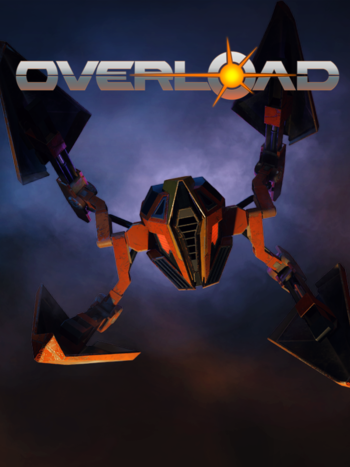 Overload is a 3D First-Person Shooter (alternatively, 6DOF shooter, for "six degrees of freedom"), and Spiritual Successor to the classic Descent games. In fact, the studio that developed it—Revival Productions—comprises many of the original developers of Descent, including Parallax Software founders Matt Toschlog and Mike Kulas.

It is 2118. Various outposts deep within The Moons of Saturn, built as part of Juno Offworld Automation's "Cronus Frontier" project, have sent out distress calls regarding worker robots, known as "autnomous operators" or "auto-ops", that have suddenly and mysteriously gone rogue, attacking and killing most personnel present. Juno Offworld dispatches the MPSV Iberia, containing a Kodachi gunship, with you as a combat-qualified Kodachi pilot, to the nearest outpost to the asteroid belt, Ymir, to eliminate all hostile operators and rescue any survivors. As the Iberia travels between the outposts and towards Titan, where the administrative center of Cronus Frontier is located, it is revealed that Gabriel Kantor, CEO of Juno Offworld and leader of the Cronus Frontier project, has gone rogue, attempting to break Cronus Frontier away from the mega-corp. In response, Juno Offworld cancels the Cronus Frontier project and orders the remaining outposts to be cleared of hostile operators by destroying the reactors in each one.

and its Steam and GOG.com store pages can be found here