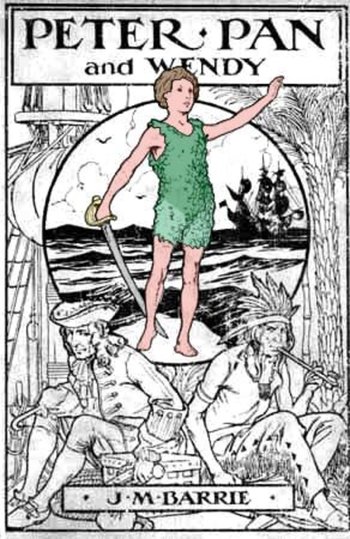 Second to the right, and then straight on till morning.
— The original directions Peter gives to Neverland (although it turns out there isn't really a 'direction' as such. He just gets there. He only gives these directions to sound clever to Wendy.)
Advertisement:

James M. Barrie was a prolific writer at the turn of the 20th century, but his most-beloved works are his play and novels about Peter Pan. Otherwise known as "the boy who wouldn't grow up", Peter Pan is the protector of the Magical Land of Neverland, an island inhabited by fairies, mermaids, Indians, and pirates. He also has a Fairy Companion in Tinker Bell, a feisty girl with one heck of a temper.

One spring evening, Peter follows his wayward shadow into the bedroom of one Wendy Darling. When Wendy helps him sew his shadow back onto him, Peter invites her to come and look after his "Lost Boys", kids who (like him) are motherless and live in the forests of Neverland.

Wendy and her brothers, John and Michael, fly away with Peter to Neverland, where they all have many adventures while Wendy mothers them. They encounter jealous mermaids, meet up with a tribe of Indians, and clash with the pirate crew of the scourge of Neverland: Captain Hook, who despises Peter for cutting off his hand and feeding it to a crocodile, which has been pursuing Hook to devour the rest of him ever since.

Finally, after a climactic battle with Peter and Hook on Hook's pirate ship, Hook is defeated and falls into the jaws of the crocodile. After Peter commandeers Hook's ship, Wendy decides she's had enough of Neverland. Peter agrees to let her go, and to let her take her brothers and the Lost Boys with her. Twenty years later, Peter Pan returns for Wendy's daughter Jane, and the adventures begin anew.

The original play is fairly Child-Friendly: Captain Hook is a blustering comic villain, the violence is usually a pratfall or similar form of Slapstick, and death is treated more like a time-out. In contrast, the book version (Peter and Wendy) later written by Barrie is a sly Deconstruction of the Victorian notion of the sacred innocence of children, full of Parental Bonus dark humor and subtle Gallows Humor; Barrie was a master satirist for his time, though few of his satires are remembered today.

Peter Pan is a trickster, only nominally human. In his first appearance, Peter Pan in Kensington Gardens (which was one of several stories included in the book The Little White Bird), Peter is alluded to as being half bird; as all children, in fact, come from birds, but only Peter is close enough to his youth to remember being a bird. In Neverland, he is more like a playful demigod, with aspects of Puck and Pan. The character has become something of a cultural symbol for youthful exuberance and innocence, especially if it persists into adulthood; it also evokes the poignant flip side - never becoming truly mature. Michael Jackson identified with the character so much he named his estate (with an amusement park, et. al. on the grounds) "Neverland Ranch". The darker implications of eternal youth and perpetual irresponsibility is likely why a well-remembered 1987 film about teen vampires was called The Lost Boys.

An unusual quirk of most stagings of the play, going back to its original productions, is that Peter is traditionally played by a young woman instead of a preteen male actor.

Between licensing by Great Ormond Street Hospital (who still holds certain rights in the UK) and the expiration of copyright in most of the world, there are clashing Sequel and Prequel books and films. In addition to the 1953 Disney film and a 2002 sequel, there was a 41 episode anime adaption as part of the World Masterpiece Theater series in 1989, the 1990 animated series on the first season of Fox Kids, Steven Spielberg's Hook (1991), a sequel that posits what would have happened had Peter eventually decided to grow up, 2003 and 2015 live-action adaptations and more. See also Finding Neverland (2004), a drama that's Very Loosely Based on a True Story, about Barrie's conception and initial production of the play.

For details about adaptations and sequels by other hands, see here.

Tropes mainly from the novel: