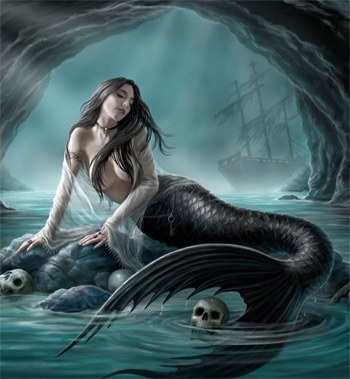 "I have heard the mermaids singing, each to each."
— T. S. Eliot, "The Love Song of J. Alfred Prufrock"
Advertisement:

As You Know, mermaids, like all legendary/mythological creatures, can vary in their portrayal from work to work.

However, despite all the differences in mermaid portrayals, they seem to have one thing in common. For some reason, mermaids tend to be called sirens, and are given the ability to sing phenomenally well, to the point of leading unsuspecting people to their doom. In traditional definitions of mythology, the Siren is not depicted as a mermaid-like fish-woman, but as winged bird-woman hybrid — in fact, the original Greek Sirens were portrayed as a cross between women and songbirds, and could die by drowning.

This trope is an old one; the siren as mermaid was well-established in the medieval bestiary. In Thomas Hoccleve's early fifteenth century text, La Male Regle, line 233, speaks of mermaids singing men to their deaths, "as old books tell us." The issue is not helped by the fact that, in many Romance languages, sirens and mermaids are referred to by the same word, typically a derivative of the Latin sirena. In another part of the world, the Filipino sirena were described in what we now envision as the mermaid siren. It could be an example of Lost in Translation that these two words became used interchangeably, displacing parts of both.