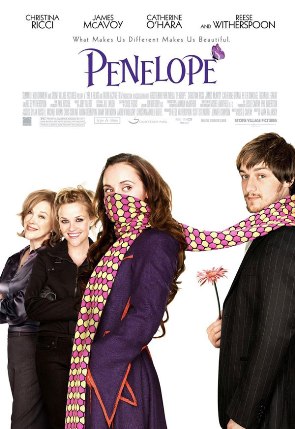 The movie was shipped to some theatres under the code-name Scarfy
Advertisement:

Loosely based off the legend of the Pig-Faced Woman

, the film is a reconstruction of the classic Fairy Tale. It follows the story a child of wealthy parents cursed with the face of a pig until she is accepted by "one of her own", which both she and her parents interpret to mean a marriage to somebody of her own social class. She is kept in seclusion in her parent's house her entire life, her very existence a secret after her parents faked her death as an infant in order to avoid the paparazzi, and she is trained in the arts and sciences to make her the perfect prospective bride. After seven years of fruitless searching for a blue-blood suitor who will remain in the same room for even a moment after seeing her pig face, Penelope (Christina Ricci) has resigned herself to being in this state forever and she (and her father) believe that it is time to move on with her life and accept the fact that this curse might never be broken. When one final suitor (James McAvoy) seems to form a genuine emotional attachment to Penelope, only to also refuse to marry her after she reveals herself to him, Penelope flees her home and begins to live her life for the first time in the real world, making friends and enjoying the world which she had only ever seen through the windows of her room.

After being produced in 2006 the film was stuck in The Shelf of Movie Languishment, unable to find a distributor for several years after the movie had been completed. Eventually, Summit Entertainment purchased distribution rights in the United States for a 2008 release.

Not to be confused with the 1966 film Penelope with Natalie Wood.