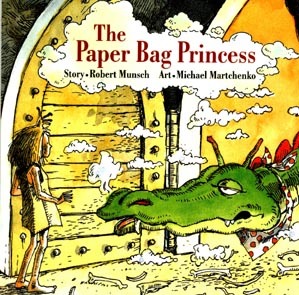 One of Canadian author Robert Munsch's most famous children's books, The Paper Bag Princess was written and published in 1980. The picture book stars Princess Elizabeth, who's vying to marry the handsome Prince Ronald. Unfortunately, an evil dragon snatches Prince Ronald and incinerates everything around Elizabeth in the process — including her clothes! Undaunted, Elizabeth finds an old paper bag, puts it on and pursues her prince.
Advertisement:

She finds the dragon in his cave, and brings him out by appealing to his vanity: "Is it true that you are the smartest and fiercest dragon in the whole world?" When he says yes, Elizabeth cunningly puts him through a series of trials to test that claim. He's so exhausted by the end that he falls right asleep.

She then opens the door of the cave to find Prince Ronald — but instead of being grateful, he's criticizing her for her appearance: "You smell like ashes, your hair is all tangled and you are wearing a dirty old paper bag. Come back when you are dressed like a real princess." Elizabeth decides that she doesn't need a prince who'll treat her that badly, and dumps him, running off into the sunset to live life on her own.

The Paper Bag Princess is often cited as a classic feminist fairy tale for its subversions of gender roles, and is well loved worldwide, but especially in its native Canada. It received an Animated Adaptation in 1994, which expanded its story considerably. Universal announced plans for a film adaptation in 2017.

The Animated Adaptation contains examples of: