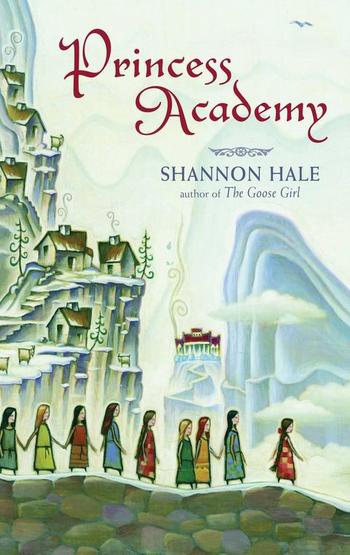 I cut all day and I squared all night
And I thought I'd mined the mountain's might
Then I saw all my work by the bright dawn light
The mountain was the world and my labor a mite
Advertisement:

Princess Academy is a young adult novel by Shannon Hale, author of The Goose Girl and Enna Burning.

It tells the story of a 14-year-old mountain girl named Miri, who lives in a small village with her father and older sister on the slopes of Mount Eskel. The villagers make their living mining linder, a type of stone that is hard enough to hold up great palaces and never crack, yet light enough to haul long distances.

One day, a messenger from the king comes to Mount Eskel to declare that all the girls aged 12-18 in the village must attend the titular "princess academy" to prepare for the day when one of them will be the prince's bride. Miri must compete with all the other girls for the chance to marry the prince, but she discovers that maybe there are other things better than being a princess.

The novels contains examples of: