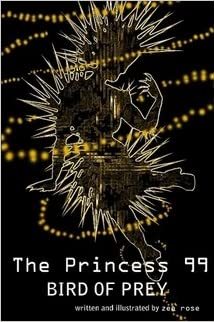 The Princess 99 is an independently published book that started out online.

The story starts off normal enough: Axel, a farm girl, goes into the city so she can attend Edgewood Academy, a school for wizards (or Crafters as they're called in the book). Then she meet Skye, an alien girl, and things go from weird to nightmarish and crazy from that point on.

In all honesty, it's best described as "What if Harry Potter took place during 1920s New Orleans and aliens were involved?"

or the first draft can be read here

The first book in the series is Bird of Prey.

Not to be confused with Princess Nine.