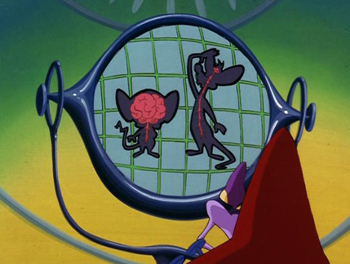 One's a genius, the other's insane.
"I may be small, but I have a big brain!"
— Jimmy Neutron: Boy Genius
Advertisement:

Being the smallest in a group will always make you smarter (and usually more agile) than the rest. This, of course, is supposed to make up for being physically weak.

Reflectively, in a Big Guy, Little Guy Odd Couple the short one is always the planner, the schemer, the wise one. The taller may be The Hero, the Dumb Muscle or the loon, the lazy one, or just the wild one, but the short guy is always somehow smarter. The Teen Genius Wise Beyond Their Years is especially often paired with a Gentle Giant, and the child in a Badass and Child Duo will often at least attempt to play the smart guy for the pair. Results will vary.

Naturally, seen often with The Smart Guy and The Big Guy of the Five-Man Band. Interestingly enough, the Trope Maker of the modern Five-Man Band, Science Ninja Team Gatchaman, had a Tagalong Kid as the Smart Guy, who was only 'smart' in The Trickster sense rather than the technical sense. The two roles would become conflated later.

And, of course, everpresent in The Short Guy with Glasses.