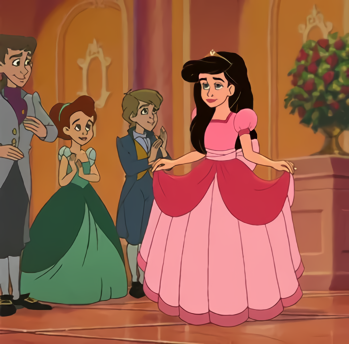 In fiction, odds are that royal princesses will have a pink dress or outfit she wears most of the time, or at least prominently. It could be anything from a simple frock to a Pimped-Out Dress.

Some parameters for this trope:

The probability for wearing pink gets higher for a Princess Classic, and lower for a Lady of War or an evil princess. Also a Winter Royal Lady wouldn't wear pink as a princess, since that's obviously not a winter color. Many princess-related toys will likely be pink as part of the Pink Product Ploy. If the princess that prefers pink is also a Pretty Princess Powerhouse then you've got yourself a Girly Bruiser.

As a little point of interest, it should be noted that real life princesses of old were more likely to wear blue. This was because pink was considered a masculine colour until after World War II, due to it being a shade of red.

A Sub-Trope of Pink Means Feminine.