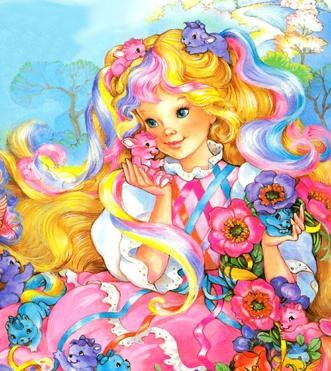 Lady Lovely Locks is a Merchandise-Driven animated series from The '80s, based on the Lady Lovely Locks toys and greeting cards made by Mattel and Those Characters From Cleveland. The show debuted in 1987 and was produced by DiC Entertainment.

The show told the tale of the pretty blonde-haired princess Lady Lovely Locks, her friends Maiden Fairhair and Maiden Curlycrown, and her Fairy Companions the Pixietails. Lady rules the Kingdom of Lovelylocks, and everyone in the land loves her. But the evil Duchess Ravenwaves, with her assistants Hairball and the Comb Gnomes, wants to take over the kingdom by cutting Lady's magic hair and gaining the power of her Looking Room. Other characters include the blind wizard Shining Glory, Prince Strongheart, who was cursed into the form of a dog, and Longcurl the dragon and her babies.

Besides the cartoon and toys, tie-in books were made, as were a series of German audio dramas set in a different continuity than the cartoon. There was also a comic book series by Marvel's UK division.