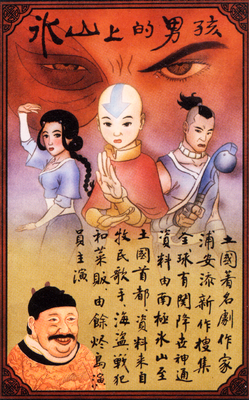 The Boy in the Iceberg is a new production from acclaimed playwright Pu-On Tim, who scoured the globe gathering information on the Avatar, from the icy south pole to the heart of Ba Sing Se. His sources include singing nomads, pirates, prisoners of war, and a surprisingly knowledgeable merchant of cabbage. Brought to you by the critically acclaimed Ember Island Players.note UUUGH! My mother used to take us to see them! They butchered Love Amongst The Dragons every year...
Advertisement:
"Come on, a day at the theater? This is the kind of wacky time-wasting nonsense I've been missing!"
— Sokka

The Gaang decides to take a break from training and planning to see a play—about themselves. They discover that the play, being Fire Nation propaganda, features a warped plot and Flanderized versions of themselves acted by a bunch of hams. It all seems like harmless fun at first, but the play brings up old wounds, and our heroes find themselves questioning their past actions. The play ends with a speculative battle under Sozin's Comet, where Aang and Zuko are killed as the Fire Nation conquers the planet.

The Gaang REALLY don't like the show (except maybe Toph). The actors in the play have a Character Sheet.