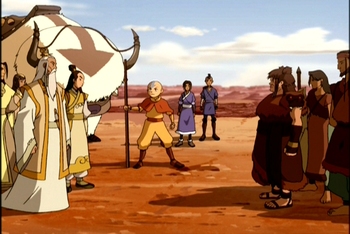 The Gan Jin are on the left, and the Zhang are on the right.
"Harsh words won’t solve problems; action will."
—Aang
Advertisement:

The next destination that the gang stumbles into is the Great Divide, the world's largest canyon. Sokka and Katara start bickering, so Aang decides to put his Avatar skills to the test. He successfully solves their minor disputes, but finds his next test to be a tougher one, when the Gan Jin and the Zhang, who have been in a feud for 100 years, need to cross the canyon together. Aang sends Appa across with the sick and elderly of the two tribes. With the help of the earthbender guide of the canyon, he escorts the rest across the vast, dry landscape. The group's incapacity to get along forces Aang to separate it, with Katara leading the Gan Jin and Sokka leading the Zhang. That night, Katara learns that Jin Wei of the Zhang stole a sacred orb from Wei Jin of the Gan Jin as he was carrying it during a ritual, while Sokka is told that Wei Jin was only trying to help and was betrayed by Jin Wei who said that he was trying to steal it. After the group makes it across the Divide, Aang is able to end the feud by telling the tribes that he knew their heroes and that it's all a misunderstanding over a game. The two tribes travel together to the capital city of Ba Sing Se. Only after they're gone does he admit to Katara and Sokka that he lied about the legends.