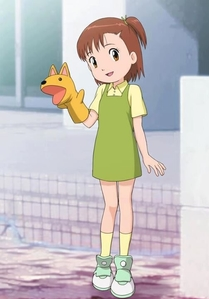 "Oh god, there is a hand inside me! Aaaaaaaaaugh!"
— Sock Hannelore, Questionable Content
Advertisement:

A puppet entirely operated by hand, usually with the puppeteer's hand inside. A common gag will involve the puppet acting implausibly independent of its puppeteer, often by being argumentative, abusive, etc. If it is independent, it's a Perverse Puppet or Demonic Dummy.

A prominent sub-type is the sock puppet, which is exactly what it sounds like: a Hand Puppet made out of a sock.* On teh intertubes, a "Sock Puppet" is an online identity that is actually an alternate account of another user.

Another sub-type, which is (somewhat disturbingly) common enough to qualify as its own trope, is the Dead Guy Puppet.

See also Muppets, which are generally more complex, involving both hands (at least — some Muppets are operated by two people) for a more lifelike effect. Bare-Handed Puppetry is an even simpler version where uncovered body parts (not necessarily the hand) are treated as puppets. For examples where someone treats their own puppet as if it has opinions of its own worth considering, see Consulting Mr Puppet.

Not to be confused with Sock Puppet.

Barnacles attempts to entertain hyenas with a sock puppet. It does not work out.

Barnacles attempts to entertain hyenas with a sock puppet. It does not work out.