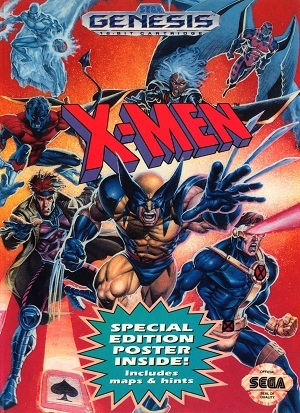 X-Men is a home console video game produced by Sega in 1993, based on the adventures of the Marvel Comics superhero team, the X-Men. One or two players can play as any of four pre-chosen X-Men: Cyclops, Wolverine, Gambit, or Nightcrawler (despite not being with the team at the time). X-Men is a Sega Genesis-exclusive game and in 1995 was followed up by a sequel, X-Men 2: Clone Wars.
Advertisement:

In the game's storyline, Magneto has managed to infect the main computer of the X-Men's Danger Room with a virus, turning off all the safety measures so that all the simulated dangers become truly deadly. When the X-Men show up for what they think will just be a routine training exercise, they instead find themselves trapped in the simulation room and fighting its fantasies, trying to last long enough to find a way out.