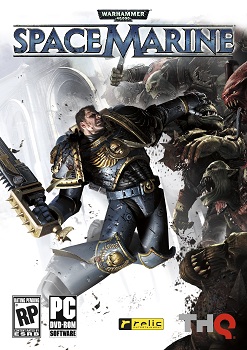 My craft is death.
Advertisement:

Warhammer 40,000: Space Marine is a Third-Person Shooter / Hack and Slash published by THQ (with the publishing rights later changing hands to Sega after THQ went out of business in 2013) and developed by the creators of the Dawn of War, Company of Heroes and Homeworld series, Relic Entertainment. While the aforementioned games are Real-Time Strategy games, the company has created a Third-Person Shooter before, The Outfit, set in World War 2, which received mixed reviews.

Being Exactly What It Says on the Tin, the game is set in the Warhammer 40,000 universe where you play as one of the Adeptus Astartes, the Angels of Death - or more colloquially, the Space Marines. Space Marines are seven-feet tall genetically-engineered, power armoured Super Soldiers where one in one-hundred neophytes who are trained as Space Marines survive (to say nothing of the pre-adolescent aspirants who were considered for induction and who they fought before hand...), split into unique "Chapters", and are devoted to the defense of humanity, the brutal, totalitarian and completely necessary Imperium of Man uniting them, and its now-on-life-support founder, who also developed the engineering process behind their creation, the God-Emperor of Mankind. Further elaboration on the 40K Space Marines in general can be found in the 'Warhammer 40K'' character page under Current Imperial Factions.

The protagonist is Captain Titus of the generalist Ultramarines chapter. An Ork horde, a species of green, inhumanly strong Blood Knights, led by Warboss Grimskull, is launching a massive attack on an Imperial Forge World named Graia in an attempt to steal Warlord-class Battle Titans. Titus and a small contingent of Ultramarines have been sent to slow them down while allied forces ready themselves for a counterattack. Later on in the game, a Chaos Warband called the Chosen of Nemeroth, including the traitorous and corrupted Chaos Space Marines, attack Graia as well. More general information on the enemy forces is available within the Warhammer 40K character page, under the "Warhammer 40,000 Orks" and "Forces of Chaos" subpages respectively.

Unlike other Third Person Shooters where a Take Cover! system is the norm, Warhammer 40,000: Space Marine intentionally does not use one to encourage aggressive tactics - while the player is capable of Walking It Off for their shields in single-player (both health and shields in co-operative play and multiplayer), getting to an enemy and performing a melee 'execution' is the only way to restore health, quickly and entertainingly. The player may quickly switch between melee weapons and ranged weapons to bring death upon the enemies of the Imperium in various forms. The game uses a 'Fury' system, where after dealing enough damage, Captain Titus can go into Fury Mode. While in this state, he gains Bullet Time with ranged weapons to Boom, Headshot! some suckers, regenerates health automatically, deals more close-combat damage, and regenerates health with each melee attack while active.

The game has a single-player campaign focused on the efforts of Captain Titus to protect Forge World Graia, a competitive multi-player between the Cosmetically Different Sides of the Emperor's Space Marines and the Chaos Space Marines, and a 4-player co-operative mode called "Exterminatus", a free bit of Downloadable Content that involves a team of Space Marines slaughtering wave after wave of Ork troops.

Being a Warhammer 40,000 game, many of the universe's tropes apply to the game.

The game was released September 6 2011 in North America, and three days later in Europe. There is a demo available on Steam, X-Box Live and PSN.

In celebration of its 10th anniversary, the game was repackaged as Warhammer 40,000 Space Marine: Anniversary Edition on Steam, coming bundled with all DLC for free, as well as some extra bonuses like the official soundtrack and artbook.

For the Emperor, brothers!

But I am finished with you Ork

But I am finished with you Ork