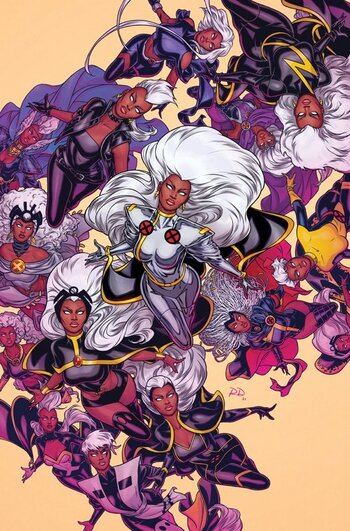 "I am a woman, a mutant, a thief, an X-Man, a lover, a wife, a queen. I am all these things. I am Storm, and for me, there are no such things as limits."
— Ororo Munroe
Advertisement:

Storm, a.k.a. Ororo Munroe, a weather-controlling mutant and one of the most famous members of the X-Men. She first appeared in Giant-Size X-Men #1 (May, 1975), created by Len Wein and Dave Cockrum. Ororo is the descendant of an ancient line of African priestesses, all of whom have white hair, blue eyes, and the potential to wield magic. Her mother, N'dare, was an African princess who married American photojournalist David Munroe and moved with him to Manhattan, where Ororo was born. When Ororo was six months old, she and her parents moved to Cairo, Egypt. Five years later, during the Arab-Israeli conflict, a plane crashed into their home. Ororo's parents were killed, but she survived, buried under rubble near her mother's body. The resultant trauma left Ororo with severe claustrophobia that still affects her today.

Ororo managed to escape the rubble of her shattered home with nothing but the tattered clothes on her back and her mother's ancestral ruby. Homeless and orphaned, Ororo was found by a gang of street urchins who took her to their master, Achmed el-Gibar. Achmed trained Ororo in the arts of thievery and she soon became his prize pupil, excelling in picking both pockets and locks. During her time in Cairo, Ororo picked the pocket of an American tourist. The man proved no easy mark, however, as he was Charles Xavier, a powerful mutant telepath who used his abilities to stop the theft. At that moment, Xavier was psionically attacked by another mutant and Ororo used the opportunity to escape.

Years later, feeling a strong urge to wander south, Ororo left Cairo. During her travels, Ororo naïvely accepted a ride from a complete stranger and was almost raped by him. Forced to defend herself, Ororo killed the man. From that moment, she swore never to take another human life. Ororo wandered for thousands of miles, almost dying during her trek across the Sahara Desert. Her mutant ability to psionically control the weather emerged soon after, and she was able to use them to rescue T'Challa, a prince of the African nation of Wakanda, from his would-be kidnappers. The pair spent much time together; however, T'Challa's duties as a prince prevented them from further exploring their burgeoning mutual attraction.

Finally, Ororo reached her ancestors' homeland on the Serengeti Plain in Kenya. She was taken in by an elderly tribal woman named Ainet who taught her to be responsible with her powers. Ororo soon came to be the object of worship of the local tribes who believed her to be a goddess due to her gift.

Years later, Ororo was forced to battle the threat of a fellow mutant weather manipulator known as Deluge, who sought revenge against humanity. With the help of several members of the team of mutant heroes known as the X-Men, Deluge was seemingly destroyed and Ororo returned to her life amongst the tribal people. The X-Men subsequently told their founder, Professor Xavier, about Storm but he declined to contact her at this point, not wanting to shock the young woman with the true nature of her powers.

Months later, however, Xavier was left with no choice but to recruit Storm and other mutants from around the world into the X-Men in order to rescue his original students from the threat of the sentient island being known as Krakoa. Xavier explained to Ororo that she was not a "goddess", but a mutant, and as such she had a responsibility to use her abilities to help the world just as she had helped the local tribes. Curious, Ororo accepted Xavier's offer, and was given the codename "Storm".

Storm has always played a very prominent role in the world of the X-Men. In her early days after her first appearance she was a major character in the new team of X-Men following the relaunch of the mutant team in 1975. Then perhaps her definitive role was as leader of the X-Men after Professor X went into space with the Starjammers for a time. She led the team through many huge challenges: the Mutant Massacre and Inferno (1988) to name but two, even through a long period when she had lost her powers. Following the return of Professor X, the X-Men were split into two teams, Gold (led by Storm) and Blue (led by Cyclops). During that period her closest male relationship was with Forge, however that somehow never fully matured and ended with the two breaking up. Following the discovery of Destiny's diaries, Storm led the X-Treme X-Men and then the X.S.E. teams.

Storm later married Black Panther and taken on a new leadership role in Wakanda. The marriage lasted a long time, but came crashing during Avengers vs. X-Men in which Storm reluctantly took the mutants' side and caused Namor to flood Wakanda. This act enraged Black Panther that he, being both King AND High Priest of Wakanda, announced divorce even if Storm defected to the Avengers' side afterwards. After Wolverine reopened the X-Mansion in New York, Storm became Headmistress of the Jean Grey School for Higher Learning and lead the first all-female team of X-Men in April 2013. In July 2014, Storm gained her first ongoing self-titled comic, written by Greg Pak. In 2015, with both Wolverine and Cyclops gone, she leads the whole team again in Extraordinary X-Men.

With the rise of the new mutant nation of Krakoa in X-Men (2019), Storm was selected for one of the twelve seats on the ruling Quiet Council in recognition of her long history of leadership and accomplishments. She split her time between council business and aiding Kate Pryde's Marauders before being chosen was one of the swordbearers of Krakoa during X of Swords, an event that caused further damage to her relationship with Black Panther and Wakanda when she had to steal Skybreaker from Wakadna's vaults. In the aftermath of the Arrako and its mutant population being brought to Earth, Storm helped take the lead in the terraforming of Mars into a mutant planet and the transfer of Arrako's population there. In doing so, mutantkind declared Planet Arrako the new capital of the Sol System, with Storm as the Queen Regent of Mars and Voice of Sol.

Storm is one of the most popular and recognizable members of the X-Men as well as one of the most recognizable black superheroes, and one of Marvel's most popular female heroes. She has appeared in virtually every media adaptation featuring the X-Men since the 1980's, including X-Men: The Animated Series, the Marvel vs. Capcom video games, and the X-Men Film Series, where she is portrayed by Halle Berry. Alexandra Shipp plays a younger version of Storm in Apocalypse and Dark Phoenix (as well as a quick cameo in Deadpool 2). Storm additionally has an entire ride centered around her (albeit a small-scale one) at Universal's Islands of Adventure, called Storm Force Accelatron.

Storm has appeared in the following works: