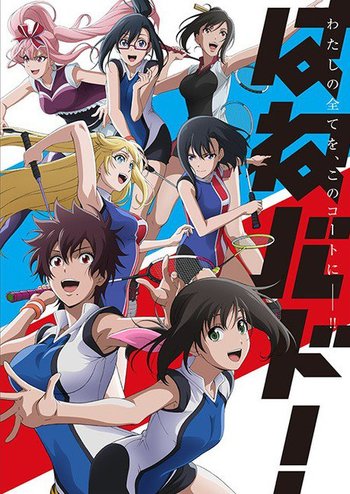 Hanebad! is a sports manga by Kōsuke Hamada, published in the monthly magazine good!Afternoon since 2013.

Kentarō Tachibana is the coach of Kitakomachi High School's badminton team. He is worried because the team has so few members that it cannot even enter competitions, but then he spots a student named Ayano Hanesaki easily climbing a large tree on the school grounds, expertly demonstrating excellent motor skills. Tachibana tries to get Ayano to join the badminton team, but finds out that Ayano hates badminton.

An animated adaptation by Liden Films aired for the 2018 summer lineup. While the manga is quite light-hearted and often comedic (at least in the early parts), the anime adopts a much more somber tone, changes some characters' personalities and rearranges the storyline significantly, making the two versions very distinct from each other.

Warning: the manga's English translation is very far behind, so there will be spoilers.