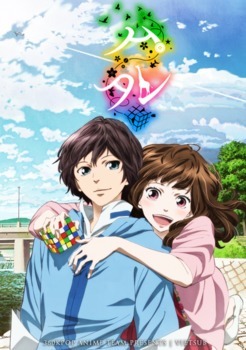 "You closed you heart. I want you to live again."
— 'Movie trailer

Hal is a 2013 Animated Film directed by Ryoutarou Makihata, with character designs by Io Sakisaka of the Blue Spring Ride and Strobe Edge fame and animation by Wit Studio (a subsidary formed by Production I.G).

20 Minutes into the Future in Kyoto, Hal (Yoshimasa Hosoya) dies in a plane crash, leaving his girlfriend Kurumi (Yōko Hikasa) depressed and withdrawn from the world. A month later, Robot Q01 is rebuilt with Hal's appearance to take care of her. Along with fulfilling Kurumi's wishes through hints from Rubik's cubes, the new Hal delves into Hal and Kurumi's past as well as learning the meaning of life.

The movie was released in theaters on June 8, 2013, and received a Blu-Ray/DVD release on December 18 of that year. To promote the series, a manga adaptation by Umi Ayase (one of Io Sakisaka's assistants) ran in the magazine Bessatsu Margaret. It was licensed and dubbed by

Funimation for an English release, with the Blu-Ray/DVD releasing on September 2, 2014.

Not to be confused with the similarly named HAL Laboratory.