"This story is fiction. The 3% of Hakata’s population is killers statistic is an utter lie. Fukuoka is very peaceful, and it is a wonderful city. There are hardly any cases of shootings. (Though there have been accidental shootings of hand guns at middle schools occasionally.) It's a city to safely spend time in, so please rest assured for those who plan to travel or move to Fukuoka."
—Chiaki Kisaki making the disclaimer on the afterword portion of the 1st light novel volume.
Advertisement: 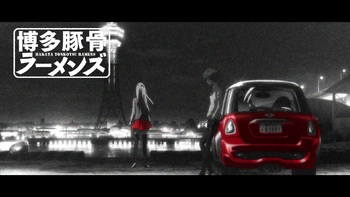 Hakata Tonkotsu Ramens (means Hakata Pork Bone Ramen[s] in English) is a Japanese novel series published under ASCII Media Works and written by Chiaki Kisaki with illustrations done by Hako Ichiiro. As of 2018, 8 volumes are published. The series has a manga adaptations (Hakata Tonkotsu Ramens and Hakata Tonkotsu Ramens Dai 2-Shō), published by Square Enix in the Monthly G Fantasy magazine while an anime series by Satelight aired in Winter 2018 on AT-X, Tokyo MX, BS11, TVQ with the first episode out by January 12, the show being directed by Kenji Yasuda and written by Shogo Yasukawa. Crunchyroll simulcast the anime with Funimation providing a simuldub for it.

It has a crossover light novel with Durarara!! called Durarara!! x Hakata Tonkotsu Ramens. Extra Games is a novel that has side story chapters that highlights backstories of certain characters and events.