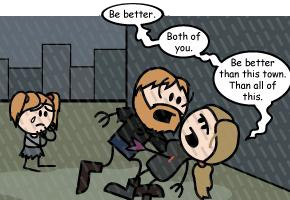 "Do you remember the night Mom died?"
"How can you even ask me that?"
Major Alexander Phinn, an ancestor of mine,
Was captured by the enemy, across the River Rhine.
The captain of the firing squad asked:
"Is there a last request?"
My Uncle Alex smiled and said:
"Yes please - a bulletproof vest!"
— Gervais Phinn, It Takes One to Know One
Advertisement:

Something you request right before you die. The opportunity may be offered to you by your executioner out of personal kindness or cultural tradition.

You can also transfer your responsibilities to someone else with your last breath. Asking someone to take care of your family, deliver a message, avenge you, or generally keep up the good fight is almost playing low though, as a deathbed promise, even by request, is very hard to refuse and nearly unbreakable — even if no one would ever know. (Though if you are Dying as Yourself, you may have no choice.) You can even do it with your enemies if they accept a Dying Truce. This can be made especially touching with added Pietà Plagiarism, or even Cradling Your Kill.

If you are dying very slowly, as of cancer, you can, in fact, make it a period before death; for instance, at the last visit to the hospital, even if you die a week later. Requests made by ghosts and other undead qualify only if undeath is ending quickly.

Occasionally a character will pretend to be at death's door, in order to get someone to agree to something; most often played for comedy.

Of course, this trope only tends to work if you're dying slowly enough. Since this is a death trope, expect spoilers below.