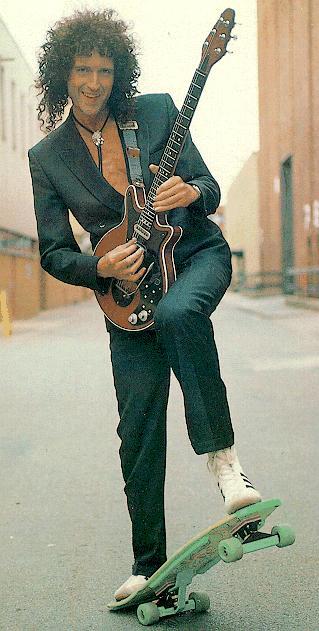 Dr. Brian Harold May, CBE (born 19 July 1947) is a British musician, best known as the lead guitarist of Queen and, after Freddie Mercury, the most famous member of the band. It should also be noted that May wrote many of Queen's most popular songs, including "We Will Rock You", "Tie Your Mother Down", "Fat Bottomed Girls", "Who Wants to Live Forever", "The Show Must Go On" (credited to the whole band, but written mainly by May), "Hammer to Fall", "I Want It All", "Flash", "Now I'm Here", "Brighton Rock", "The Prophet's Song", "Las Palabras de Amor", "No-One but You" and "Save Me".

Often overshadowed by Mercury's charismatic presence and the fact that he didn't sing much himself, May's talent as a guitarist got more attention when he went solo. He is well renowned for his virtuoso guitar work and Rolling Stone recognizes him as the twenty-sixth greatest guitarist of all time on their list of 100 Greatest Guitarists of All Time. Sammy Hagar (Van Halen), Steve Vai and Frank Zappa, among others, have praised his excellence.

He is also a well known animal welfare activist and astrophysicist (as alluded to above, he has a PhD in astrophysics). An asteroid is named after him, and he took part in research activities for NASA's New Horizons probe to Pluto and the Kuiper Belt.

Gwilym Lee portrayed him in the Queen biopic Bohemian Rhapsody.

Not to be confused with the Australian film composer of the same name.