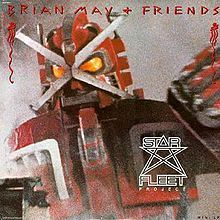 Star Fleet Project.
"On the 21st and 22nd of April 1983, five musicians from different backgrounds, who had previously known each other only as friends, played together for the first time. Purely for fun. In listening to this record, I hope you will share in the excitement we felt. STAR FLEET is the theme tune for a superb TV sci-fi series broadcast in England for kids of all ages; Japanese visuals and British soundtrack including music by Paul Bliss. The heroes pilot space vehicles which can assemble into a giant robot for land battles. The aliens fly fantastic insect-like craft which spawn smaller fighting machines, all intent on possesion of the secret of F Zero One... Having been introduced to all this by my small boy, I became equally obsessed by it, and formed the idea of making a hard rock version of the title theme."
Brian May, from the liner notes

Star Fleet Project is the debut EP by Brian May, released in 1983. Credited as "Brian May + Friends", it is May's first recording outside of Queen. Besides May, the group consisted of guitarist Eddie Van Halen, bassist Phil Chen (formerly played sessions for Jeff Beck and Rod Stewart), keyboardist Fred Mandel (formerly played sessions for Queen) and drummer Alan Gratzer (REO Speedwagon). Queen's drummer Roger Taylor also provided backing vocals for the Title Track. The project was just done for fun and not intended for public release, which explains why the mixing was minimal. But eventually May was asked to bring it out anyway and so it did.

The title and the robot on the cover refer to an obscure Japanese science fiction series, Star Fleet, which was far more popular in the United Kingdom than in its homeland Japan.

While difficult to find, Star Fleet Project remains famous as the only recording to feature May and Eddie Van Halen together, and for the instrumental homage "Bluesbreakers (for E.C.)"... which the honoree, Eric Clapton, absolutely hated.

Send a trope list out across the sky! TROPE FLEEEEEEEET!