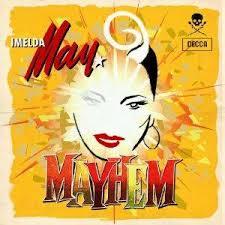 Wouldn't believe it, if you seen it
Oh, mayhem doo doo doop
Yeah, mayhem doo doo doop...
— "Mayhem"
Imelda May is an Irish singer, songwriter, and multi-instrumentalist, currently mostly based in London. She is noted for her jazz and rockabilly influences, her impressive voice (with a noticeable Dublin accent), and her one-off collaborations with a range of other artists as well as her solo work.
Advertisement:

She was born Imelda Mary Clabby in Dublin in 1974, sang in a TV commercial at the age of 14, and began touring the Dublin clubs as a singer at 16. Her albums to date are: