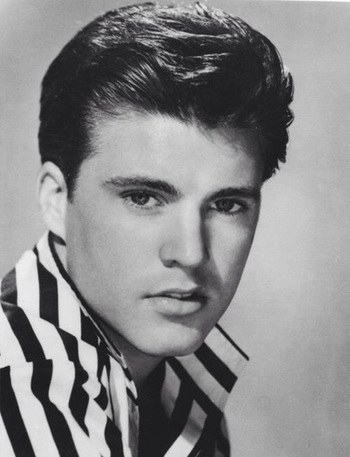 "I used to play around with hearts that hastened at my call."
Advertisement:

The son of bandleader Ozzie Nelson and his wife, singer Harriet Hilliard Nelson, Ricky joined the cast of his parents' radio Sitcom The Adventures of Ozzie and Harriet in 1949, at age 9, alongside his older brother David. All four Nelsons made the jump to television in 1952. Ricky, blessed with good looks and charisma, became the show's Breakout Character in the next few years. Skilled in playing several instruments, Ricky became interested in the burgeoning Rock & Roll movement, and he convinced Ozzie to let him start a solo career in music. He recorded a Cover Version of Fats Domino's "I'm Walkin'" for Verve Records, and Ozzie used an entire episode of the show ("Ricky the Drummer", which aired April 10, 1957) as a showcase for the song, climaxing with Ricky singing and playing drums on it. It became a big hit that caught the attention of Fats' label Imperial Records, who signed Ricky to a five-year deal.

His first #1 hit for the label was his cover of Sharon Sheeley's "Poor Little Fool", which sold over two million copies. From 1957 to 1962, he was one of the most prolific musicians in rock and roll with thirty songs in the US Top 40—at the time only behind Elvis Presley (53) and Pat Boone (38)—including his second #1, 1961's "Travelin' Man". Although he was often described as a Teen Idol, he also gained a following among other young music hopefuls. Paul McCartney and John Fogerty have cited Nelson as an early influence and have covered his songs.

On May 8, 1961, he changed his recording name to Rick Nelson, though the Ricky moniker has stuck, especially among those familiar with his singing and acting career (which included Rio Bravo and The Wackiest Ship in the Army). Then, just after signing a 20-year deal with Decca Records in 1963, the hits came to a halt, as the The British Invasion and the rise of the counterculture rendered his style passé. Rather than chase trends, Nelson formed the Stone Canyon Band and transitioned his music to country rock, where he was an early influence to the California Sound, and in turn the likes of Jackson Browne, Linda Ronstadt and the Eagles (Eagle Randy Meisner had been in the Stone Canyon Band). 1972's "Garden Party", about an incident at a Richard Nader Oldies concert at Madison Square Garden on October 15, 1971, where the audience booed him (possibly for his playing new songs rather than his oldies) was his final Top 40 hit and has more recently come to be regarded as his Signature Song.

Embarking on a comeback tour toward the end of 1985, Nelson and his band flew in Nelson's private aircraft (a propeller plane built in 1944) from Guntersville, Alabama (where they'd performed at a nightclub owned by one of his former band members) en route to a scheduled New Year's Eve show in Dallas, but the plane's heater caught on fire, causing it to crash near the tiny town of De Kalb, Texas (west of Texarkana), killing him, his fiancée Helen Blair and five others on board. A multitalented performing career and an untimely death were traits that he shared with his grandfather George Nelson (a Vaudeville performer who died at age 47) and father Ozzie (who died in 1975 at age 69). He was posthumously inducted into the Rock & Roll Hall of Fame in its second ever class in 1987, and was listed in Rolling Stone's list of 100 Greatest Artists of All Time in 2004, at #91.

He was married to Kristin Harmon, daughter of Heisman Trophy winner and sportscaster Tom Harmon, from 1963 to 1982 (during which time Mark Harmon was his brother-in-law). All four of their children went into show business: actress Tracy Nelson, musicians Matthew and Gunnar Nelson (twins who formed the band Nelson, who had a #1 hit in 1990 with "(Can't Live Without Your) Love and Affection"), and actor/musician Sam Nelson.

I'm a tropin' man, and I've made a lot of tropes all over the world: