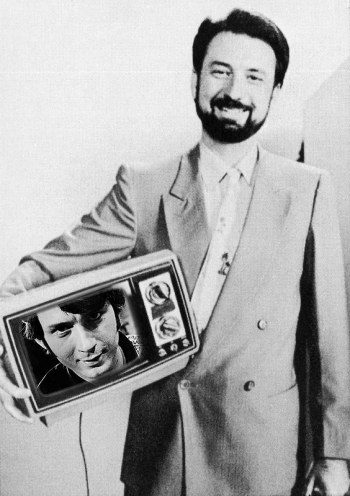 Enlisting in the Air Force at 18, Nesmith took up the guitar while in the service and became involved in the Texas folk music scene after his discharge. After releasing a self-financed 1963 single ("Wanderin'") he decided to try his luck in California, forming the folk-rock trio Mike, John and Bill with two of his old Texas buddies (John London and Bill Sleeper) in the wake of The Beatles' success, and later releasing two solo singles for the Colpix label under the name Michael Blessing in 1965.

After seeing the famous "MADNESS!" ad in Variety, he successfully auditioned for The Monkees.note He was the only one of the Monkees who did an actual walk-in audition after seeing the ad. Davy Jones was a Columbia Pictures contract player who was attached to the project from the start, Micky Dolenz's agent saw the ad and arranged his audition, and Peter Tork was tracked down by the producers on the recommendation of Stephen Stills. Alongside the massive success of The Monkees, Nesmith also began to make a name for himself as a songwriter, with the ultra-hip Paul Butterfield Blues Band recording "Mary, Mary", and Linda Ronstadt having her breakthrough hit as the lead singer of the Stone Poneys with "Different Drum".

As a Monkee, Nesmith had always brought a country sensibility to his vocal spots, and composed a fair few songs that juxtaposed country music with other genres in hitherto unheard ways. But he often struggled to get attention for his music in the Monkee setting, and his growing frustration over the downward spiral their career was taking led Michael to negotiate a release from his contract in February of 1970. Around that time he formed The First National Band (with the aforementioned John London on bass, plus John Ware on drums, and Red Rhodes on steel guitar), one of the first country rock groups, continuing his odyssey of off-kilter country musings. Having built good relationships with the executives at RCA Records, which had distributed the Monkees label Colgems, Nesmith moved to RCA, and debuted with the First National Band's trilogy of albums, which produced two decent-sized hit singles ("Joanne" and "Silver Moon"). Eventually London and Ware split, marking the end of the FNB, but Nesmith and Rhodes continued on in various other configurations, perfecting their progressive country sound, then edging towards pop and rock, with social commentary becoming an increasingly bigger factor in Nesmith's lyrics. After RCA dropped him he formed his own label and production company, Pacific Arts, and revisited the mix of music and video that The Monkees had pioneered. Bolstered by an imaginative early Music Video, his 1977 song "Rio" became a surprise international hit.

In the late '70s, Nesmith began creating small musical segments for Saturday Night Live. This eventually led to the creation of a larger-scale project in Elephant Parts, and... the rest, as they say, is history: In 1980, he was approached by Warner Communications to create a music video TV show for the new channel Nickelodeon. Nesmith developed PopClips, which was hosted by a pre-fame Howie Mandel and was a progenitor of MTV, launched by Warner in 1981. While Nesmith had no direct involvement with the actual creation of MTV itself, and turned down a job with the network just before its launch, the channel would not have happened without him. His subsequent career saw him release the odd album, create a virtual online concert stage, partake in several Monkees reunions, and continually speculate about possible future technologies, many of which have not only seen the light of day, but have also become household items.

In 1998 he added "published author" to his résumé, with the novel The Long, Sandy Hair of Neftoon Zamora. He published a second novel, The American Gene, in 2009, and released a memoir, Infinite Tuesday: An Autobiographical Riff, in 2017.

He passed away of heart failure in 2021, just a few weeks shy of his 79th birthday.