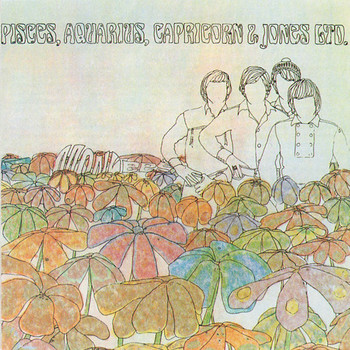 "Darkened rolling figures move through prisms of no color/Hand in hand, they walk the night, but never know each other..."
"I thought Pisces, Aquarius was the one that caught it all. We went back to the basics of making music for the television shows – trying to make good pop records – and I think we did a good job. I think it sounds good; it’s well-produced and so forth."
—Michael Nesmith, from an interview used in the liner notes of both deluxe CD reissues
Advertisement:
"There were still some wonderful moments on Pisces Aquarius. It's sort of a mixed-mode band. You hear us, and you hear the pros. It's a compromise. It’s not what I would have liked, but it's better than what was before, as far as I'm concerned."
—Peter Tork, also from the deluxe reissue liner notes

Pisces, Aquarius, Capricorn & Jones Ltd. is The Monkees' fourth album, originally released on November 6, 1967 through Colgems Records in the US and RCA Records in the rest of the world. It has become one of their most acclaimed works.

With overbearing Control Freak music supervisor Don Kirshner ousted, the Monkees had recorded their third album Headquarters mostly by themselves, with only a handful of session musicians; its success proved that the made-for-TV band could make music on their own terms while maintaining their popularity. However, there were many people in the hippie counterculture who still doubted their credibility, dismissing them as the "Pre-Fab Four". Also, the world of pop music was evolving; The Beatles and Bob Dylan were expanding the boundaries of what a hit record could be, while Psychedelic Rock was rapidly maturing. Clearly, the Monkees had something to prove, and they stepped up to the challenge with Pisces, Aquarius, which became their most eclectic and experimental project yet, equaled only by the Head film and soundtrack.

The album was something of a Troubled Production; it was recorded and mixed over a period of six months (April to October 1967) in four different cities (Los Angeles, New York City, Nashville and Chicago), whenever the Monkees could find time in their busy schedule of touring and filming their TV series. Also, the track listing was adjusted several times before the final release. Despite this hectic atmosphere, the group's artistic ambition carried the day. Their new songs incorporated everything from strings and horns to Country Music, from bossa nova to some of the earliest Electronic Music to appear on a pop record, while taking advantage of sophisticated production techniques. This meant that the band had to go back to using session musicians to fill out their sound, which some members were more comfortable with than others (see the above quotes). Still, the public was ready to accept the psychedelic version of the Monkees, as Pisces, Aquarius became their fourth #1 album in a row. Admittedly, it was also their last #1 album, as well as the last time during their original career that they recorded an entire album as a group; from then on, each Monkee would record his own songs with his own musicians, separate from the others, with only a few exceptions.

Rhino Records has released two deluxe remasters of Pisces, Aquarius, a single-disc CD in 1995 and a two-disc CD in 2007; each features different bonus tracks. While most of these are just alternate takes or mixes of the songs from the finished album, both remasters feature two pieces that were dropped from the LP at the last minute, "Special Announcement" and "Goin' Down". Also, the 2007 reissue includes "Riu Chiu", a Christmas Song from the TV episode "The Monkees' Christmas Show".

Along with too many session musicians to list, but three deserve special mention: