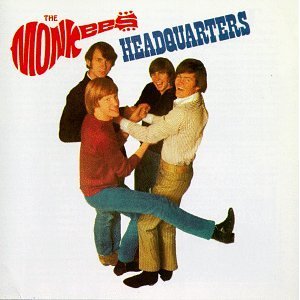 Left to right: Michael Nesmith, Peter Tork, Davy Jones and Micky Dolenz.
Here we come...
Walkin' down the street...
We get the funniest looks from...
Everyone we meet!
Hey, hey! We're the Monkees!
And people say we monkey around!
But we're too busy singin'
To put anybody down!
We're just tryin' to be friendly
Come and watch us sing and play!
We're the young generation
And we got somethin' to say!
Hey, hey! We're the Monkees!
You never know where we'll be found!
So you'd better get ready...
We may be comin' to your toooown!
- The theme song to their TV show
Advertisement:

The Monkees were two things.

1. The stars of an Emmy Award-winning series which ran from 1966 to 1968 on NBC, revolving around a band called the Monkees. The series relied on a lot of pseudo-slapstick, along with well-polished pop music (written by folks like Neil Diamond, Harry Nilsson and Carole King), which made it well known and iconic. That page is located here.

2. An initially Fake Band assembled by the TV show's creator/producers, Bob Rafelson and Bert Schneider, to star in their project. That page is located here.