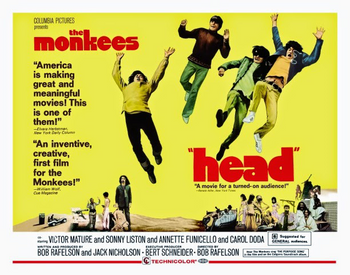 "From the guys who gave you ''Head''..."
"Hey, hey, we are The Monkees
you know we love to please
A manufactured image
with no philosophies"
— From "Ditty Diego - War Chant"
Advertisement:

Head is a film released in 1968, starring the TV rock group The Monkees, and distributed by Columbia Pictures. It was written and produced by Bob Rafelson and Jack Nicholson (yes, that Jack Nicholson, before he was a multi-Oscar winning actor), and directed by Rafelson.

Head begins at the dedication of a bridge; The Monkees suddenly interrupt the ceremony by running through the assembled officials, to the sound of various horns and sirens. The rest of the film has no overriding plot. There are several short vignettes that consist of a conflict and resolution, but the film is essentially metaphors for how the group felt about different aspects of their fame. It's composed of seemingly stream of consciousness stringing-together of musical numbers, satire of various film genres, elements of psychedelia, and references to topical issues such as The Vietnam War.

The film was a flop, only earning back a fraction of its $750,000 budget, and was one of the factors that led to the band's demise. Audience and critical reception were both poor; it was too trippy to appeal to established fans of the band, its actual target audience being the same people who hated their TV show. Through the years, however, it was Vindicated by History, along with the band itself, and became a Cult Classic, standing as an example of pure weirdness matched by very few films of the era.

"But the porpoise is troping good-bye, good-bye":