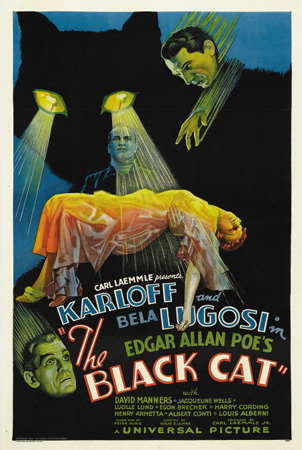 The Black Cat (1934) is an American horror film starring Bela Lugosi and Boris Karloff, the first of six movies to pair them together. It was written and directed by Edgar G. Ulmer.

Peter Alison (David Manners) and his new bride Joan (Jacqueline Wells) are on their honeymoon in Hungary when they discover that a mixup in train reservations has left them sharing a compartment with Dr. Vitus Werdegast (Lugosi), a psychiatrist traveling to see an old friend, Hjalmar Poelzig (Karloff). After leaving the train, they continue their journey on the same bus, since they are going in the same direction. When the bus crashes near Poelzig’s house and Joan is injured, however, the couple find themselves subject to the dubious hospitality of Poelzig, and discover that Werdegast seeks not friendship, but vengeance. Poelzig, for his part, is revealed to be the leader of a satanic cult, and plans to sacrifice Joan in a ritual.

A rare turn for Lugosi as a heroic character, The Black Cat was part of a wave of horror talkies in the 1930s, following the shared success of Dracula and Frankenstein. While Edgar Allan Poe's name is listed in the credits, the movie had little to do with his short story of the same name.

The film was well received by critics and the public. On the movie review aggregation site Rotten Tomatoes, The Black Cat received an average rating from critics of 85%. The film was also ranked #68 on Bravo's 100 Scariest Movie Moments for its "skinning" scene.

As this movie is more than eight decades old, unmarked spoilers are most certainly below.

The Black Cat contains examples of: