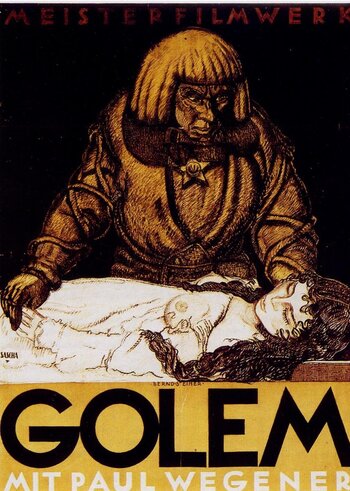 Der Golem, wie er in die Welt kam (The Golem, How He Came into the World) is a 1920 German silent horror film, co-written, co-directed, and starring Paul Wegener, about the origins of the Golem of Prague. It is one of the earliest and most influential Expressionist films and is considered a masterpiece of the German silent cinema. Wegener had produced two earlier films using the character, Der Golem (1915), a mostly lost film telling a somewhat similar story, and Der Golem und die Tänzerin (The Golem and the Dancing Girl) (1917), in which an actor (clearly Wegener playing an Expy of himself) puts on the make-up of his monster role as a prank on a dancing-girl whom he is interested in.

The film would influence later horror films profoundly, in particular James Whale's Frankenstein (1931) and Bride of Frankenstein (as, for instance, the monster's playing with an innocent little girl).

This film is in the public domain, and several versions are available on YouTube.

Not to be confused with the 2018 movie of the same name.

The Golem, How He Came Into the World provides examples of: