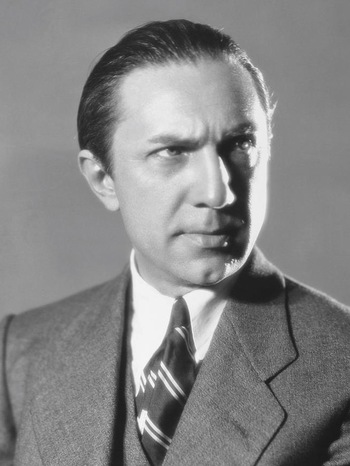 "Every actor is somewhat mad, or else he'd be a plumber or a bookkeeper or a salesman."
Advertisement:

Bela Lugosi (born Béla Ferenc Dezső Blaskó; October 20, 1882 – August 16, 1956) was a Hungarian-born stage and screen actor mostly known for his work in horror movies, in particular his performance of the title role in the 1931 version of Dracula. Following this film's success, he suffered severely from type-casting and the limitations of his heavy native accent, and spent the vast bulk of his career eking out a living in various low-budget productions, culminating (if that is the word) in his work with director Ed Wood.

Born in Lugos, Hungary (hence his stage name), he began acting in theater at a young age. He served in the Austro-Hungarian Army in World War I, getting wounded in action against Russia. Lugosi began his film career while the war was still ongoing, and also became involved in Hungarian politics and trade unions. After Bela Kun's failed communist revolution, Lugosi was marked for arrest due to his political views and fled to Germany. There Lugosi continued his career (including, oddly enough, appearing in several successful Westerns). He emigrated to the United States in 1920 and became a citizen in 1931.

After some minor film roles through the '20s (already typecast as villains) and a successful stage career (where he often played romantic and heroic characters), Lugosi achieved his Star-Making Role as Count Dracula in Hamilton Deane and John L. Balderston's stage adaptation of Dracula. Lugosi first took on the role in 1927, playing the Count in 261 performances on Broadway before touring the country. After the tour concluded he relocated to Los Angeles and began focusing on movie roles. Ironically, he had to lobby to play Dracula on film as Universal initially wanted an established star for the role.note Lon Chaney, Sr. was Universal's first choice, but he died before production began

Although Lugosi appeared in several successful films for Universal after Dracula, he failed to break through his typecasting and remained overwhelmingly cast in horror and science fiction movies, often of negligible quality. During this time, he worked on several occasions with and was overshadowed by Boris Karloff. He managed to make a sort of comeback in death, however, when Martin Landau won an Oscar for his brilliant portrayal of Lugosi in Tim Burton's 1994 film Ed Wood.

Other notable or infamous movies in which he appeared: White Zombie, Murders in the Rue Morgue, The Wolf Man, Son of Frankenstein (as Ygor, generally regarded as one of his best performances), Glen or Glenda and Plan 9 from Outer Space. He also had a supporting role in the classic Greta Garbo comedy Ninotchka, although he's still scary (he's a commissar). Many Mystery Science Theater 3000 fans will also remember him from the serial The Phantom Creeps ("Zees vill zimplify everytink!"), as well as the movie Bride of the Monster ("He tampered in God's domain").

Bela Lugosi is known for these tropes: