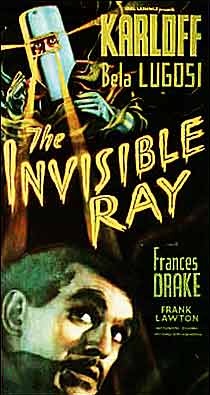 "I believe that this city is at the mercy of a madman whose body is an engine of destruction."
— Dr. Felix Benet
Advertisement:

A scifi thriller from Universal, made in 1936.

Scientist Janos Rukh (Boris Karloff) has discovered that in the past a powerful meteorite fell on Africa. He arranges an expedition to there, which includes his wife and a scientist collague Dr. Benet (Bela Lugosi), among others. He researches the meteorite for a long time, which makes him lose his wife to another man and later his health and sanity due to the radiation from it.

After his research is put to use without his consent, his frail mind snaps and he starts murdering those he deems to have wronged him with the killing touch he gained from the meteorite.

Some footage of the film would later be reused in Universal's The Phantom Creeps serial.