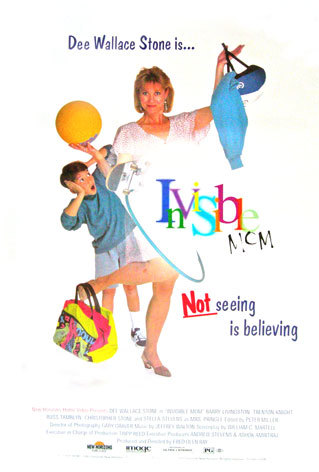 Dee Wallace starred in this direct-to-VHS sci-fi comedy, which was produced in 1995 but not released until 1997.

Stone plays Laura Griffin, a suburban housewife whose husband has invented an invisibility powder. After a successful test on the family dog, their mischievous son, Joshua, takes some of the powder and dumps it into a glass of cola, hoping to become invisible himself. Laura drinks the cola, not knowing what Joshua did, and becomes the Invisible Mom. Her husband has an antidote, if he can retrieve it from the lab.

In the 1999 sequel, Invisible Mom 2, Laura still has traces of the invisibility powder in her body. The Griffins adopt an orphaned boy whose relatives want him for his trust fund.