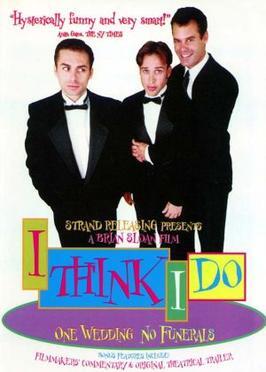 I Think I Do is a gay screwball comedy written and directed by Brian Sloan.
Advertisement:

Five years ago, Bob (Alexis Arquette) and Brendan (Christian Maelen) were college roommates and best friends, but their friendship ended when Bob made a pass at Brendan. Now their old friends Matt (Jamie Harrold) and Carol (Lauren Velez) are getting married, and they've both been invited to the wedding in Washington, D.C. Bob is in a monogamous relationship with soap opera star Sterling Scott (Tuc Watkins), while Brendan is questioning his own sexuality.

I Think I Do contains examples of: