Music / The Man From Utopia 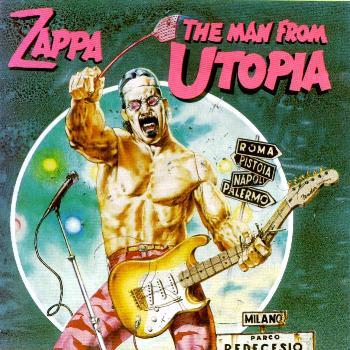 The Man From Utopia is a 1983 album by Frank Zappa. Originally Zappa wanted to bring out an album called "Chalk Pie", but when a bootleg copy was brought out he scrapped the plans. "The Man From Utopia" is best remembered for songs like "Cocaine Decisions", "The Dangerous Kitchen", "SEX", "The Jazz Discharge Party Hats" and "Moggio". Like many albums Zappa released during The '80s it's not highly regarded among fans, mostly due to the fact that in three songs Zappa and his band members sing in rather obnoxious voices and the rest of the material isn't particularly up to Zappa's standards either. Together with Thing-Fish (1984) it's often perceived as his worst album.

The CD re-release has a different track order (see the notes) and adds "Luigi & The Wise Guys" as bonus track.