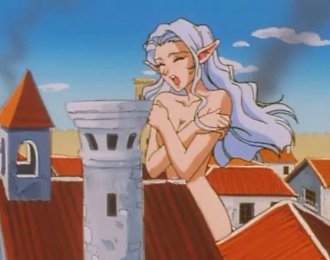 A consequence of growing big.
Advertisement:

A character, often an attractive young woman (though it doesn't have to be), through some nonsensical circumstances, is publicly stripped to her underwear. Or less. The stripped woman, rather than running off to hide, might be shown as temporarily losing her senses, such as standing like a statue, screaming, or shooting her hands all over her body to try to cover every naughty part at once.

If the stripped woman is old, ugly, or even Hollywood Homely, the joke will be less Fanservice and more Comedic Sociopathy. In these cases the target of humor might not be the woman herself but male onlookers, who might start looking away and howling in agony, as if they fear the sight will turn them to stone. (Or, in especially farcical works, vomiting profusely. Or maybe even killing themselves.)

When it comes to male examples, unattractive men are more likely to be on the receiving end than attractive ones are, and this trope could be used to show that the man is "unmanly." He might, for example, shriek and try to cover his pectoral muscles.

Note that in order to meet the ramifications of this trope the scenario has to involve a person getting stripped through no fault of their own, either by accident or through the malice of another. The stripping has to be more or less instantaneous and the person has to panic as soon as the exposure is discovered. If any of these criteria are not met, it's a subversion.

This trope arguably had its glory days during the late 1970s and most of the '80s, when it was a common gag in teen sex comedies, but thanks to a reluctance of modern media to show unclothed skin, as well as the feminist movement this trope is relatively uncommon in the United States. Today, it's usually present only in works that aren't afraid of coming off as offensive. Filmmakers and TV producers will often opt for something in the same vein but a little tamer, such as the Marilyn Maneuver.

Arguably a subtrope of Hilarity Ensues, seeing as Naked People Are Funny. Will often (though not necessarily) be performed by a Fanservice Extra, or a Reluctant Fanservice Girl. In-universe, the victim invariably tends to be the Alpha Bitch. Similar to Hand-or-Object Underwear, but in those cases the stripping tends to be self-inflicted or not quite as sudden, and what kids tend to eventually graduate to after gags regarding Comedic Underwear Exposure.

See also Wardrobe Malfunction or The Nudifier. For use of this as a combat tactic, see Defeat by Modesty.

Finally the third example occurs when Ross reveals that he saw her. She's only mildly embarrassed, partly because she's already re-dressed by this point, and partly because he's seen her naked before.