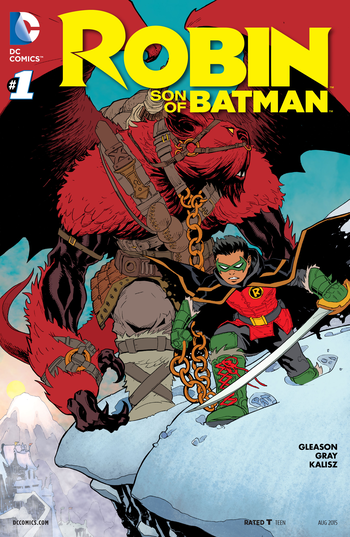 Robin: Son of Batman is a 2015 ongoing comic book series that's part of the DC You movement, showcasing the current Robin, Damian Wayne, on his own adventures separate from his father, Batman.

Before he became Robin and was still part of the League of Assassins, Damian was tasked to a test of character known as the Year of Blood. But now, after becoming Robin and literally experiencing death for some time, Damian is dead-set on becoming more worthy of his title as Robin and thus, goes on a worldwide trip to return the artifacts he had stolen during the Year of Blood.

Has little to do with the animated film this comic book shares a subtitle with apart from involving the offspring of Batman.

This comic book has examples of the following tropes: