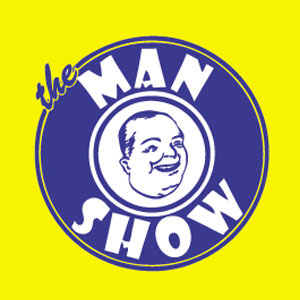 "Grab a beer and drop your pants;
Send your wife and kids to France.
It's, the, Man Show.
Quit your job and light a fart;
Yank your favorite private part.
It's, the, Man Show.
It's a place where men can come together;
Look at the cans on this chick named Heather.
Juggy girls on trampolines;
Time to loosen those blue jeans.
It's the, Man Shoooooooooooooow!"
—The Man Show theme song
Advertisement:

The Man Show was a half-hour program on Comedy Central starring Adam Carolla and Jimmy Kimmel (followed by Joe Rogan and Doug Stanhope in the final season) that centered around jokes about...well, "manly" stuff. Sports, beer, babes...that sort of thing. Aside from giving Jimmy Kimmel an extra paycheck (he still did a little work on Win Ben Stein's Money when the show first aired), The Man Show was notable for its eye candy-laden "Juggy Dance Squad", who would provide entertainment for the audience during commercial breaks. And the whole "jumping on trampolines" bit at the end of every show.

Lasted for five seasons. The first four seasons featured Adam and Jimmy, and all four of them are available on DVD at the Comedy Central store. The fifth and final season featuring Doug and Joe, widely regarded as being inferior to the previous seasons, has not been released on DVD.

It's the Man Tropes!